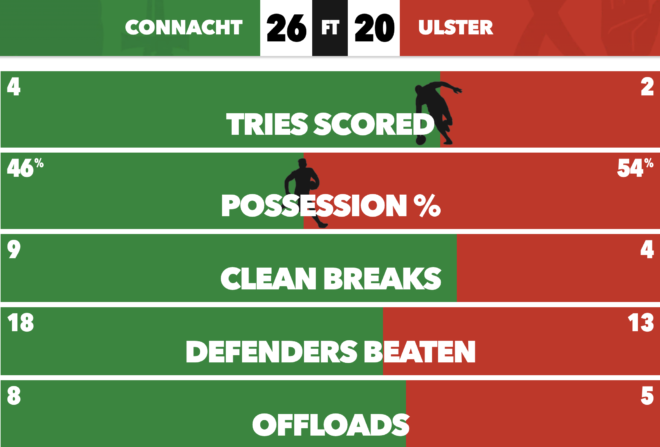 Craggy statsman Danny Deegan ran the rule over Connacht’s superb display and victory over Ulster in the Aviva stadium and the stats backup the general view that Connacht were well deserving of their victory.

Connacht converted 4 of 6 their opportunities when entering the Ulster 22 and 100% success in the first half, scoring their two excellent tries, really hitting the ground running.

In the first half the defence was at 100%, denying Ulster scoring on their 4 entries.

The overall tackle success rate for Connacht was an impressive 93% and the forwards only missed 1 tackle of the 118 that they made.

In the first 20 minutes of second half Ulster piled on the pressure and had 78% possession and 69% territory and scored 14 points to make it a one point game going into the final quarter.

However, in final 20 minutes, with the bench unloaded, Connacht turned around both the possession (53%) and territory stats (58%) to set up the winning bonus point try.

Connacht conceded twice as many penalties as Ulster did during the match, 12 to 6 and also turned over possession on 10 occasions, so there is plenty for the coaching staff to work on prior to the Munster match.

John Porch was awarded the man-of-the-match gong an the stats show why he was worth the award. From his 10 carries he made 75m, made 3 clean breaks, beat 2 defender, made 2 offloads, had 1 try assist and scored a try. Not a bad days work.

Alex Wooton made an impressive debut as he beat 4 defenders and made 3 offloads on his 7 carries, let’s hope he carries that form on for the rest of his loan period.

The captain was as impressive as always with an average of 4.1 metres per carry, including 1 clean break and 2 defenders beaten, being the best of all the forwards on the field, to go alongside his 14 tackles.

Dave Heffernan must of caught the eye of Ireland coach Andy Farrell with his 15 carries (a match high for forwards) garnering 22m, with 2 defenders beaten and 8 of those carries getting over the gainline. He was also Connacht’s top tackler with 18 and was 100% with his lineout accuracy.