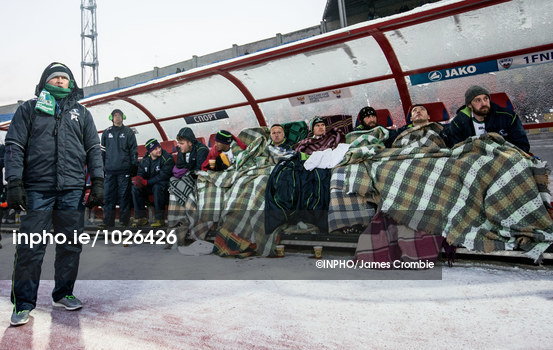 By Rob Murphy (watching from the warmth of the studio)

There will quite likely never be another European club rugby game like the one that took place in Krasnoyarsk last Saturday afternoon.

The Siberian city, a couple of hundred miles directly north of western China is an outpost like no other. Two of Russia’s best rugby clubs reside there and Connacht faced one of them in sub zero temperatures at the weekend.

In brief, Connacht won and secured a bonus point despite the -20 degree temperatures in the late afternoon. They led 6-0 at half time thanks to the accurate kicking of new signing at out half AJ MacGinty.

It was a cagey and understandably error strewn first half. However, Connacht produced a second half as good as anything in the Pat Lam era to notch four excellent tries and emerge from this outlandish test with the maximum points.

The young Connacht side were slowly beginning to figure out ways of coping with the biting cold and the tenacious but technically limited opposition.

Early in the second half the westerners got the first try from ball won against the head in the scrum with George Naoupu popping up at the base, passing to Bundee Aki who released Niyi Adeolokun in the corner for the first try and a 14-0 lead at that point.

The second try seemed to be the match clincher and was certainly the score of the game. Sparked by an excellent offload from George Naoupu in his own 22 that released Aki on a huge break from one 22 to the other. The superb Ultan Dillane took it on a few extra metres before John Muldoon finished in the corner on the next phase.

Young full back Darragh Leader got try number three and while Enisei responded with their first try much to the delight of the small but vociferous home crowd.

The bonus point was wrapped up with six minutes to go. MacGinty made it with a clever cross kick for Rory Parata to rise high and finish off try number four.

The late Enisei try didn’t dampen the sense of achievement from Connacht after a maximum return from a huge challenge.

The new organisers of European rugby, the EPCR, have a lot to answer for over this shambolic fixture.

Promotion rugby in outposts such as this is a noble endeavour. The feedback from those travelling with Connacht, (including around 15 of the provinces most adventurous supporters) on the reception received and enthusiasm for rugby backed all that up. But common sense said that playing a fixture there in the winter months is tantamount to reckless.

So why did it happen? The new organisation running European rugby stemmed from the revolt by French and English clubs 18 months ago.

As part of their new charter they have expressed a noble wish to spread the net wider in terms of interest in the competitions and introduce fringe countries to the club rugby landscape. Enisei qualified for the Challenge Cup last year as a result of this new format.

The Krasnoyarsk based side have wealthy backers to help fund their long excursions in the competition. The EPCR welcomed them in but due to the winter based competition, initially insisted that all their home games must be played in the city of Sochi in southern Russia where pitches and temperatures would be more acceptable.

However, late last summer, for reasons still unclear, the Russians were granted one fixture in their hometown. Connacht lost the draw to see which side would travel.

Newcastle and Brive will play them in Sochi as planed. Concerns were raised over weather conditions in November in that part of the world but clearly ignored.

Connacht were not charged to travel to the game, that was the benefit. It remains unclear who picked up the bill for this trip. Considering the astronomical costs involved in the 16 hours of chartered flying (12,000 Euro per hour of flying) it is hard to imagine how the EPCR could have covered those costs fully without some additional funds.

Feasibility studies and careful planning fell by the wayside. The exact details of how Connacht would fly were still not confirmed two weeks before the trip.

In the end, the chartered plane used to fly Connacht to Siberia broke down while sitting idle in sub zero Krasnoyarsk airport for five days and Connacht were left stranded.

So instead of arriving back into Galway late on Saturday night, most of the players returned late Tuesday evening. A logistical nightmare and a predictable one stemming from naive planning by competition organisers.

Now back on home soil the squad must prepare for a key fixture against Brive on Saturday at the Sportsground.

Pat Lam left 12 front line players at home for the trip to Russia in a bid to balance the workload on his squad. That decision is looking all the more prudent in hindsight after the difficulties on the trip as a whole.

Expect lots of changes and fresh legs in Galway this weekend as Connacht look to maintain top spot in the pool against a Brive side that defeated Newcastle 13-9 on Friday night.

The Enisei trip is history now and it looks as though no long term injuries have been picked up but the shambolic organising cannot go unhighlighted.