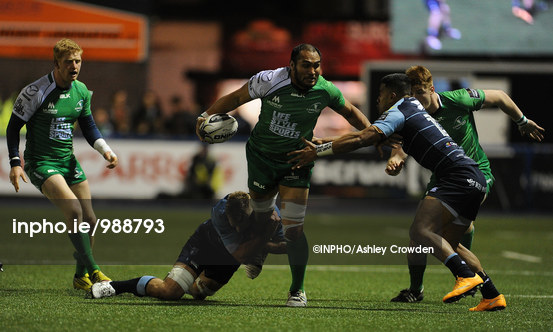 It might only be a first loss in nine games for Connacht but this one, like the only other defeat this season in Glasgow, will rankle for weeks to come with the westerners. They lost to a Blues side that is a pale shadow of some great teams of the past, lacking confidence, guile and any sort of wow factor.

Yet Cardiff did just enough to overcome Connacht in this tussle on their 4g pitch at the Arms Park on Friday night. In front of a small crowd that came probably unsure what to expect after a season of seven defeats in the previous eight games, the Blues started well but faded considerably in the first half and were fortunate to trail by just three at the break.

Connacht can legitimately blame injuries for their sluggish start to the second half with both scrum halves forced off, leaving Matt Healy in command of the nine spot which understandably meant slow ball from the base even if it was augmented by the wingers ability to make some blistering half breaks.

Even with all the momentum, the Blues took some time to turn it into points but when Tom James did get their try in the corner, the momentum seemed very much with them. Yet still Connacht fought back towards the end and the westerners had the hosts scrambling on numerous occasions in the final stages to cling on for their victory. More on that anon.

From the famous win over Munster, Connacht were without the following starting players for this fixture in the Welsh capital. Robbie Henshaw, Aj MacGinty, Denis Buckley, Ultan Dillane and Eoghan Masterson while Nathan White and Shane Delahunt were rested for the trip, while Kieran Marmion was kept in reserve on the bench in the eighth and final change.

Early on in this contest at the Arms Park, the problems seemed to be getting worse. Craig Ronaldson was the first to go down thanks to a stray but unintentional head collision with an opponent’s elbow. It all flowed from there. Quinn Roux on his first game back having missed five through injury was stretchered off with a serious leg injury that could have out for up to three months.

Next to go was Ian Porter at halftime and 60 seconds into Kieran Marmion’s evening, he too was out with a head injury leaving Matt Healy to fill in at scrum half a position he hadn’t occupied since his school days. Eoin McKeon picked up a hand injury in the final quarter after the Blues second try while Bundee Aki went over on his ankle.

In just two games the on field injury count is at 12 with only two of those players (Bundee Aki and Ian Porter) in line for a possible recovery by Friday night for the visit of struggling Newcastle in the European Challenge Cup.

Even then, Aki and other currently fit squad members like Aly Muldowney and John Muldoon could probably benefit from some sort of rest before the huge tussle with Ulster on Stephen’s Day. Ideally Pat Lam would also like to manage the workload of key performers such as James Connnolly, Tiernan O’Halloran and Matt Healy but that’s hardly an option now.

A slow start might well have been the ultimate reason why Connacht lost this game. Loose kicks, ponderous attack play, needless concession of penalties all added up to field position and momentum for the Blues and they drove over after a well constructed lineout with the outstanding Manoa Vosawai getting the touchdown at the back of the maul and Rhys Patchell converting.

The response from the round 8 league leaders was to crank up their attacking play and score two tries in a brilliant ten minute spell. The first off the back of a lineout and cleverly re-directed maul that saw McKeon get the touchdown. The second was after some sustained attacking play in the 22 with Ian Porter scoring in the corner after some skilful off loads from Muldowney and Healy.

In the second half, Connacht’s 13-10 lead evaporated and they trailed by seven before the late comeback. Bundee Aki was the inspiration. The centre has been in world class form in recent weeks. He looked like a superstar at times here with crunching tackles, key turnovers, powerful carries and some searing openfield breaks.

Had the support lines being a little better, Connacht might have won but the team that was on the field in the final quarter was disjointed and hugely disrupted by the aforementioned injuries. That might account for the late late five metre lineout that didn’t yield a try. Five phases on the Cardiff line ending in a knock-on. The missing scrum halves proved costly here.

That was game eight in this 16 week run of games. Half way there then and Connacht’s squad has taken one or two big hits as one might expected. Newcastle are up next. They are struggling desperately in England at the moment and that might be where there focus is for the moment.

Connacht’s minimum aim will be one win from two and they will hope to get to the Ulster game on Stephen’s day with enough key men in place to challenge one of their big rivals for a top four or top six finish. The next two weeks are a bit of a distraction but understandably, they want to get back to winning ways quickly so the importance of the fixtures shouldn’t be underestimated
either.