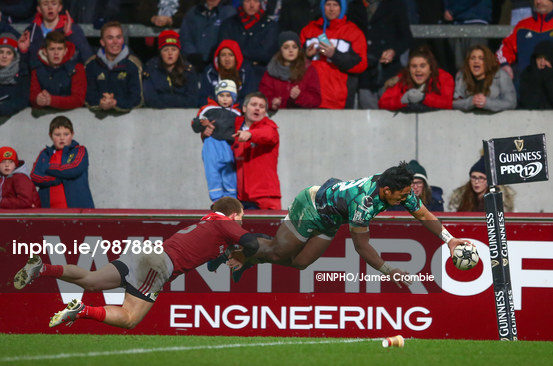 The final scrum of a pulsating game at Thomond Park was quite probably excruciating to watch for the travelling Connacht support. On the second attempt, it was securely locked down by two warriors, more on them anon, and the ball was popped back to Craig Ronaldson who dispatched it to touch to spark scenes of unimaginable joy for west of Ireland rugby fans everywhere in the world.

Thankfully, on the day that was in it, thousands of those west of Ireland rugby fans were in Limerick and their singing, chanting and roaring made this ground breaking result all the more memorable and defiant.

As Munster fans hit for the exits, the hallowed turf of Limerick’s famous rugby ground belonged to a group of (mostly) young rugby players with ambition that is proving harder and harder to hide and their success starved supporters who are daring to dream.

The two warriors locking down that scrum were Ronan Loughney and Finlay Bealham. Both unheralded. The former a fully capped international from 2004, playing some of the best rugby of his career at 34. The latter an academy graduate with bags of potential and list of steady performances in the scrum.

The replacement props. As good as place as any to start when you speak of this tale of a win that you couldn’t say was unexpected but you could certainly say felt seismic. If the victory away to Toulouse was a bolt from the blue and a scarcely believable triumph at the time this was a seismic statement, a result that did seem possible beforehand and seemed even likely for long periods during the game yet by the end, you still had to pinch yourself.

Pat Lam will tell you over and over again that history is important. That he loves history. That he respects history but that it has no bearing on what his players do on the field. He repeated this mantra afterwards but even allowing for all that, he could not ignore that reaction at full time.

Be it fans, players or the national media in the post game press conference, no one was about to play this achievement down. Everyone wanted a piece of the story. Connacht teams are usually good for big performances and the odd headline but they do all that in their own time and on their own patch. Disrupting the status quo elsewhere on this island is another scenario entirely.

That stat that we discussed last week has been put to bed. 37 games away from home against Irish provinces without a win. The run of 13 years was really hanging over this squad. Lam’s men were making progress but that marker seemed to be a cloud that could no longer be ignored.

And his side did this with 9 Connacht born players in the 23 man squad plus a further six under 23 players developed fully within the highly regarded Connacht academy. We’ve known this for quite some time but the island of Ireland is finally waking up to the fact that there is something brewing in west of Ireland rugby at professional level that simply cannot be ignored any longer.

This game has been and will continue be dissected and analysed like no other in the history of the province. The attitude and gall displayed by Connacht from the very get go was flabbergasting.

In the first quarter alone Munster made 58 tackles to Connacht’s 15. The home team could not keep the ball. They couldn’t get out of their own half and they were lucky in a sense that they only shipped 10 points in that period.

They were fortunate to get a chance to bounce back from Tiernan O’Halloran’s try but took it well off a lineout and maul and a 10-5 half time scoreline was hardly an insurmountable challenge. To their credit, the hosts offered plenty in the early stages of the second half but their arrogance in shunning kickable penalties for attempts at tries cost them. Connacht’s defence repelled them time and again.

Connacht were set to win comfortably it seemed, when Ronaldson stretched the lead to eight but then they conceded a penalty try and a yellow card in one phase to put everything up in the air as far as the outcome was concerned. John Muldoon was guilty of an early tackle and deserving of a yellow card but the penalty try was a remarkably poor call.

The character and focus demonstrated by Connacht in those ten sin bin minutes when the score was 13-12 are what marked them down for unprecedented praise and attention this week. One turnover and penalty earned young replacements Dave Heffernan (24) and Sean O’Brien (20) encapsulated the entire effort.

Young men were to the fore here James Connolly (22) who made a sensational debut at openside flanker. Shane Delahunt (21) making huge strides at hooker. Ultan Dillane (22) at 14 caps in the second row and Eoghan Masterson (22) consistently dominating some strong back row opponents.

Older warriors were also key, John Muldoon produced a barnstorming performance despite his sin bin. Aly Muldowney made 20 carries and 14 brilliant off loads and acted as an outlet at each and every creaking point along the way. While Nathan White’s form has him at the top of the list of tight heads in Ireland.

The sin bin ended on 75 minutes with Connacht maintaining their slender one point lead. Muldoon came back on for a Connacht scrum in his own half. Munster wouldn’t get a finger on the ball over the next nine phases. Bundee Aki scored a try for the ages after a brilliant side step, break and off load from Robbie Henshaw that encouraged his New Zealand born teammate to try his hand at some levitation.

To a man, this squad have suddenly realised the extent of their potential. All old boundaries are now broken. There is no logical limit to what they can achieve this season. The Challenge Cup and the PRO12 are not exactly normal targets for the province but for now at least, they can dare to dream.