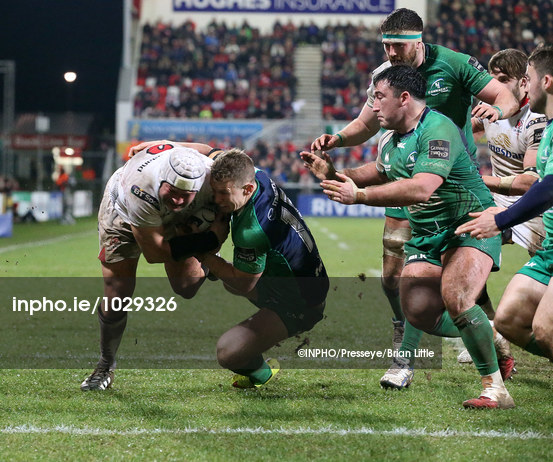 The result in Ravenhill last Friday night was never going to be significant in the bigger picture of Connacht’s season. A win would have been historic, momentum affirming and another springboard moment. Yet the defeat can honestly be described as a blip and nothing more than a small detour ahead of the defining section of the season.

Connacht lost top spot in the PRO12 at the weekend. Leinster’s battling home win over Munster proved enough to help them draw level on points with the westerners and then creep ahead by virtue of having won an extra game. Pat Lam and co won’t be unduly worried by all that.

In a game riddled with errors but interspersed with moments of quality, Ulster emerged with a crucial home win based on some stern defence and aided couple of impressive tries in either half. They built up an 18-3 lead but were kept scoreless in the last 35 minutes as a resilient Connacht refused to wilt.

Connacht’s goal line stand with 13 men on the field during the final ten minutes was a talking point in the aftermath. It yielded nothing in terms of points but spoke volumes in terms of character and commitment. Of course, those in the stadium could see that it also spoke to Ulster’s overwhelming lack of ambition to use their backline when they had such a numerical advantage and the uninspiring nature of their gameplan throughout the evening.

Let’s not get carried away though. Ambitious attacking rugby is all well and good. And Connacht certainly have shown more of that than any of their three provincial rivals in recent months. But it loses its allure if the play is littered with handling errors and poor decision making as was the case on Friday.

On 16 occasions during the clash with Ulster, Connacht coughed up possession through their own errors. Misfiring lineouts, loose passes, ill discipline at the breakdown and a general lack of accuracy compounded matters. This was a game where the better team on the night won but one where the visitors went home fully aware of how they managed to lose the contest too.

As it stands, there are four guaranteed games left this season with a possibility of an additional four more knockout fixtures. Injuries are taking their toll. The fluidity of their attack play is starting to show signs of disruption and yet, despite this, the self belief and sense of conviction is unwavering. Sheer grit and determination saw them home against Leinster. It kept them clinging on against Ulster too.

The European adventure is a perfect distraction right now. Far from needing a break, Lam is no doubt relishing a change of tack. The Grenoble match and the Challenge Cup itself is providing Connacht with a real opportunity to break new ground but on a more basic level, the extra game will allow the westerners iron out some problem areas ahead of home tie with a Munster side that will be desperate to the point of frantic when the arrive in Galway.

The Grenoble tie simply isn’t a must win for Connacht and with a fourth choice out half and key players carrying knocks and bruises, it can’t be viewed as such. Yet the fixture pops up at just the right time. A Top 14 side from the bottom half of the table that can score lots of tries but tend to ship just as many and more. A shootout is likely on a Saturday evening, all or nothing, both sides having a go. Bring it on.

Former Grenoble player Shane O’Leary could get some vital added experience at out half. The team might rediscover some of the accuracy and fluid attack play that has deserted them in the last couple of games. It’s also an opportunity to address the lineout issues and figure out new ways of converting visits to the 22 into points.

In more simple terms, even in defeat, Connacht will be in a better place when they hit the Sportsground a week later than they would have been had they had a week off to ponder what went wrong in Belfast. In victory, they’ll bounce back to Galway all set to create history against their southern rivals and relishing a Challenge Cup semi final at the venue the following week.

The PRO12 target now is gone way beyond Champions Cup qualification. It is focused making the top four and perhaps more honestly, making the top two. It now seems likely that the final round home tie against Glasgow will be a straightforward winner takes all battle in the race for the top two. And that’s even if Connacht only take five points from their games against Munster at home and Treviso away.

Key men are carrying knocks. Tighthead Nathan White is sidelined for at least another few weeks, while full back Tiernan O’Halloran missed his first PRO12 game of the season on Friday and is out for five weeks. Out half options are thin on the ground. Aj MacGinty, Craig Ronaldson and Jack Carty remain sidelined and all three might miss the Munster game. So new options and combinations need to be explored and developed.

One all or nothing cup game on the edge of the french alps won’t define the season but it could prove the catalyst to further success and it really does seem to be just what the doctor ordered.