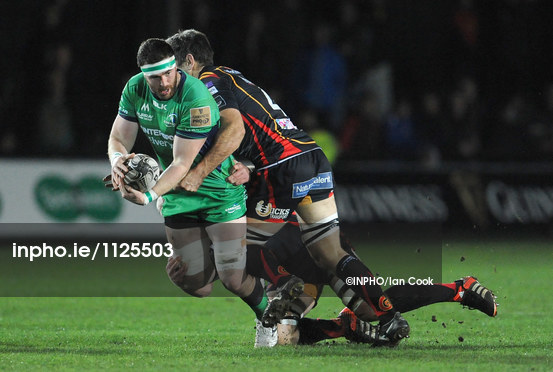 Yet another sub standard display in what has been a sub standard PRO12 campaign so far. Two wins from seven games, two home wins on a run in October where Connacht brilliantly rediscovered last season’s form for a few short weeks and that’s it. In terms of the PRO12 title defence it has been dreadful three months. Heading into the break, the reigning champions are in the bottom three and cast well adrift.

On a perfect night for rugby in east Wales, Newport’s plucky Dragons – missing five Welsh internationals compared to Connacht’s three in the Irish squad – conjured up a victory born from a collective determination in defence and an ability to turn a litany of Connacht errors into scores at the other end of the field. Sure, they were hanging on at the end as Pat Lam’s men finally came alive but overall they deserved their win.

This is all about cause and effect now for Connacht. The cause of this poor start is clear even if the effect is still a little hard to fathom. We know Connacht lost key men last summer in the transfer market and in terms of replacing Aly Muldowney and Robbie Henshaw, they had to look within their squad. That seemed to be working in games against Ulster and Toulouse but the real effects of the departures comes when the squad is banged up and in need of a dig out.

Depth in the squad, cover for key positions, that’s the problem now. Take Andrew Browne for example, the big Galwegian second row stood up and was counted during the four game win streak but he picked up an ankle injury after five minutes here and new signing James Cannon had to come in. The big former English under 20 lock looks like he needs a lot more time with the squad to get up to speed.

It also meant an adjustment in the game plans, as Browne like Muldowney last year, is a key focal point in the attack in midfield during broken play. Quinn Roux stood in for Browne in that role during this game but that was asking a lot of the South African and it showed as the game wore on. In this simple example, the cause, player departures and a high injury toll, has a clear effect.

The same can be said for the absence of front row trio Denis Buckley (injured), Tom McCartney (injured) and Finlay Bealham (in Chicago with Ireland). The scrums aren’t as solid, lineouts aren’t functioning and all three are among the most dynamic and skilful front row forwards in the PRO12. Replacing what they bring with other front row forwards is asking an awful lot. Again, a clear consequence of the problems.

The story in the backline is much similar, Robbie Henshaw might have played most of his rugby for Connacht at 13 but that allowed for Bundee Aki to be in at 12 and insured a solid midfield outside of Jack Carty (or Aj MacGinty) last year. Craig Ronaldson (like Andrew Browne in the second row) filled the boots well here, he played at twelve in some key wins and Aki was at 13. It worked a treat and was even working brilliantly after 20 minutes in Leinster until injury struck.

However, the form and the performance level in the last two weeks becomes a little harder to fathom when one looks at the errors in more detail. For example, the departures and injuries don’t account for Peter Robb’s struggles in Newport on Friday night. He should be a ready and able replacement for Henshaw in so many ways but on Friday, he dropped the ball five times before being hauled off before their hour mark. That’s uncharacteristic for the rising star and it proved costly..

Beyond that, key men aren’t firing on all cylinders in the past two weeks. Tiernan O’Halloran, Bundee Aki, Jake Heenan, Eoin McKeon and Jack Carty just didn’t look themselves in this one and haven taken a step back since the European action at the Sportsground. The tricky question here is, how much of their wavering form is down to the disruption in the pack?

Connacht started well in this one, dominated the first ten minutes but failed to score. A misfiring lineout was the first sign of trouble, one such set piece led to Ashley Hewitt’s first try. Shane Delahunt’s overthrow on halfway went straight into hands of the Dragons all conquering scrum half Sarel Pretorius, he broke at speed and set his backline in motion, quick hands and nifty footwork from Hewitt did the rest.

By halftime the gap was 13-6, Connacht were fortunate to be still in contention but just after halftime, the Dragons scored another try from a brilliant attack that started inside their own half and included a well placed kick to the corner for Hewitt to chase down and score. The conversion had it at 21-6 before a Carty three pointer narrowed the gap.

Connacht’s late revival was underlined by a try from Niyi Adeolokun after patient phase play around the 22. He burst through on a brilliant line scored under the post for what would turn out to be the score that at least clinched a losing bonus point. It could have yielded a late win as Connacht had chances including a lineout and numerous phases in the 22.

That move broke down on a forced pass from Bundee Aki and with it the game was gone. If anything, Connacht were fortunate that Tavis Knoyle missed a late kick to take away the losing bonus point. It might feel like scant consolation but with so much ground lost in recent weeks, they’re going to need every point they can get in the games ahead.

Top four now seems like a distant prospect, top six a long shot but after the game Pat Lam was adamant that all is not lost in their Pro12 campaign and he insisted that his side can get back into the hunt for the top six and Champions Cup qualification. The next two home games are against Cardiff on November 25th when the internationals continue and Treviso a week later. No one will dispute the must win nature of those games.