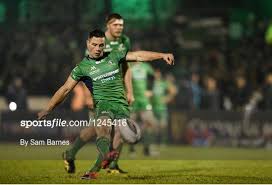 Connacht 18 Cardiff 7
By Rob Murphy at the Sportsground

The fog is lifting for Connacht. The autumn has not been kind to Pat Lam’s men, five defeats in seven means they are a forgotten foe among the elite sides in the PRO12 and slight to the edge of the radar of Wasps and others in the Champions Cup, yet there is a sense that all is not lost after this much needed home win on Friday.

The first ten games were a bit of a mess but hardly detrimental to the overall season goals. While a proper title defence would have been on the agenda, a much maligned and poorly planned pre season proved very costly early on. They bounced back from three initial defeats and a fortunate postponement in Parma to beat Edinburgh, Ulster, Toulouse and Zebre but lost their way in Dublin and Newport.

On Friday evening at a freezing Sportsground, uncertainty was in the air as the sold out crowd filtered in nice an early to enjoy some of the amenities along with the usual pre match entertainment that seems to be making the whole Connacht rugby experience one of the more sought after tickets in the city these days.

That uncertainty was warranted, patchy form, numerous returning injured players with rust to shake off (Denis Buckley, Tom McCartney, John Cooney and Craig Ronaldson among others) all combined with the fact that the visitors had won five of eight to start the season and came in with just two players on Welsh duty compared with three for Connacht.

By full time, the sense was that that air of doubt had almost fully dissipated, not because this was some sort of fluid all conquering display, in fact more probably precisely because it wasn’t such a display and that there were still eleven points between the sides despite a litany of handling errors and miscues.

If Connacht are to finish sixth (they currently sit eighth, seven points off Cardiff but with a game in hand) then clean home wins like this are going to be vital. By clean, we mean by a margin of eight or more points ,thus denying their rivals that all important losing bonus points. Of the teams ahead of Connacht, both Cardiff and the Scarlets look catchable. Neither look infinitely better than Lam’s men, that’s for sure.

The foundation for this win came from the set piece play. Scrum and lineout worked well, particularly scrum. Tighthead prop Conor Carey looks like a really clever off season acquisition. The former Methodist College star arrived from English second tier side Nottingham during the summer and has settled into an important role well. He’s old school in his size, scrummaging and rampaging runs but quickly settling into the new school when it comes to adapting to Connacht’s loose play.

The return of Buckley and McCartney also played a key role in Connacht’s early dominance in the various areas of restarting play. The first try came from a five metre scrum that had the Cardiff pack going forwards. All three of their front row had come on for Wales against Japan a week earlier but here they were in Galway looking less than comfortable. John Cooney marked his return with the try.

The seven zip lead lasted one phase as about 15 seconds after the restart Jack Carty’s overly ambitious pass went over the head of three Connacht players and into the hands of the alert Tom James for his sixth try of an eventful season. By half time Connacht had restored the lead to 10-7, but the game was delicately poised and the Blues had almost nabbed a second try in the final ten minutes of the half, Cooney’s defensive effort proving key in stopping them.

After half time, Connacht offered a lot more in attack. They stretched the lead to six before the game’s pivotal moment. It was Bundee Aki’s try that turned the tide firmly towards the men in green and that score was made by the sheer brilliance and innovation of Niyi Adeolokun.

He transformed a turnover into a try scoring attack in the blink of an eye with a dinked chip kick into space that caused consternation. The former Trinity winger won the race to the loose ball, picked it up without having to arch his back more than a degree or two and set up a ruck deep in the 22 that had the Blues in desperation mode. Quick hands from forwards and backs with John Muldoon and Jake Heenan involved set up Aki in the far corner and the lead was more than substantial at that point. Bar a few shaky moments late on, Connacht saw it home from there.

There’s lots to like about this display, Cooney’s return was a big plus, Caolin Blade’s fine effort from the bench however was a firm reminder that the team now has three top quality scrum halves vying for inclusion in the big games with Wasps over the next few weeks. Nepia Fox Matamua marked his return with a similar reminder of the depth that’s coming through while emerging new signings Stacey Ili and James Cannon had impressive displays.

Before all the fun with Wasps in Coventry and back home in Galway, before the Christmas period showdowns with Ulster in Belfast and Munster at College Road, there’s a Saturday afternoon showdown with Treviso. Away from the tv cameras, away from the glitz and the glamour, Connacht need five points to continue their effort to climb out of this almighty PRO12 crater they’ve dug themselves into. Signs suggest, they are on track.