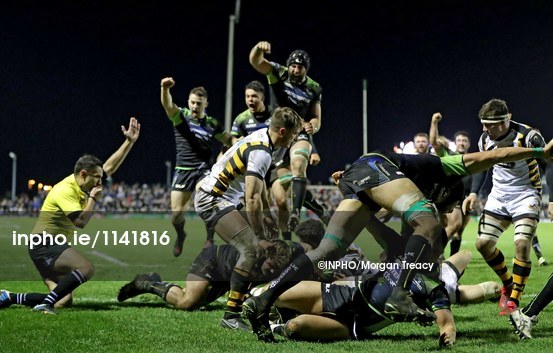 Connacht 20 Wasps 18
By Rob Murphy at the Sportsground

This was Jack Carty’s moment. Pure and simple, a 24 year old from Athlone with the weight of a province on his shoulders as he stood over a conversion kick with the ball placed on the right hand touchline and his right foot line up ready to strike it. Win or draw was the scenario, it was last chance saloon.

No position on the rugby field is more scrutinised and misunderstood than the role of the out half and when there’s a local young lad in the role, often times, it can only heighten both those elements. Connacht fans desperately want their own academy graduate to shine and drive on with the mantel, to follow in the footsteps of Eric Elwood but the process of learning on the job has tested their patience at times. It shouldn’t but it does.

Carty has kicked 55% of his goals this season, a statistic far too low at this level but not consistent with his form in previous years and in terms of the basic match day numbers, not actually relevant in costing Connacht any more than one losing bonus point along the way. That said, his 62nd minute miss in Coventry last week was a momentum killer, no question about that.

One thing is for certain, Carty is as diligent and dedicated to the task of improving when it comes to the role. He has worked closely with Elwood to improve his kicking technique and each bad weekend this season has been followed by a week of additional practice, he’s like a golfer who is close to finding that perfect swing on a consistent basis.

The kick warrants such time in a single report. It was glorious, truth be told, so much pressure, so many doubters, all blocked out by the coolest kid on top of the hill at College Road. The silence was deafening as his right boot struck the ball, the initial trajectory was wide right but that was just a brief few milliseconds before it turned perfectly with the wind and dissected the posts landing in the ecstatic crowd.

Connacht are not playing fluent rugby at the moment, they are a creative, skilful, disjointed muddled conundrum at the moment and have been all season. Most of the negative stuff is coming from bad luck and lousy circumstances and in a sense is out of their control but what is illuminating and uplifting for the followers is the manner in how they are grinding and grafting for wins at home and trying to build some momentum.

The fruits of last years trophy winning exploits shine through in the closing stages of big games. They turned over the ball three times in the last seven minutes as they chased the win from a five point deficit yet they never gave up, kept battling right to the the final three seconds when Niyi Adeolokun stole into a ruck and won a penalty he had no right to win.

The confusion that led to replacement referee Matthew Reynal allowing them to kick to the corner and take a lineout despite the clock having reached 80 minutes will understandably leave a sour taste for Wasps but it shouldn’t be looked upon as a result changing scenario. Wasps had their chances to finish this game off, they failed to do so and should look within for the real answers.

Connacht led 13-7 at half time having rallied late in the half in response to Wasps 14th minute try from Joe Simpson. That score was created by the brilliant openside flanker Tom Youngs who stood out above all other forwards from both sides in the game. Making a bucket load of tackles and beating more defenders (seven) than any player on either side.

Just before half time though, Carty’s deft crossfield kick neatly landed in the pathway of temporary replacement, and proven finisher,Danie Poolman for Connacht’s first try and a six point half time lead. Connacht had sorted out the lineout issues from a week previous, survived a Tiernan O’Halloran sin bin and thanks to another inspired display from Kieran Marmion at nine, were controlling the contest by the break.

After half time, Wasps took charge, not in a manner associated with flashy play in the backline or long sustained spells of ball retention but through relentless tireless defence and an ability to turn Connacht over at crucial junctures in the game. Then Marty Moore came on at tighthead and in two scrums changed the course of the game, bettering a tiring Denis Buckley who had dominated the duel last week.

The against the head push five metres out led to Josh Bassetts try on 72 minutes and looked to be the winning of the game. It was a monstrous statement from the English Premiership side even if the subsequent conversion from Jimmy Gopperth tailed wide. Three times in the closing stages they backed that score up with a turnover but each time they failed to steady the ship.

That opened the door for Adeolokun and Connacht and once they went to that corner, there was only going to be one outcome. What was most encouraging though was how new signing and five time Fijian international controlled proceedings at the back of the maul before crashing over the line for the score, he became the glue that has been missing in that particular area of the field.

That paved the way for the chief protagonist in our story to take centre stage for the final act. It was a fitting conclusion to a game that did more to underline the ever growing folklore that surrounds games at the Sportsground and the rugby team that resides there. For now though, threat this in isolation, we asked last week if there was a kick in this team, we got our answer, now we wonder if there is a consistent run in them. That would be a nice bonus. Next stop Belfast.