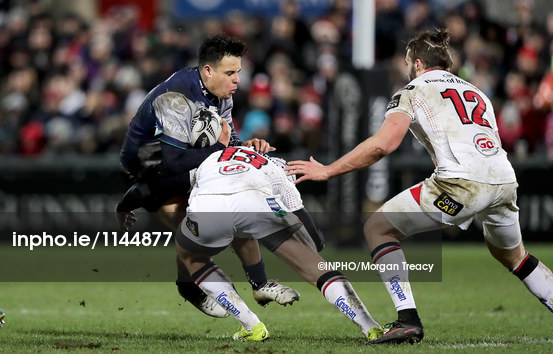 There’s no doubt Connacht’s away record improved immeasurably last season but it is regressing at a rapid rate as 2017 rolls in. Each away defeat has its own extenuating circumstances but if you take the last nine months, from April to now, Connacht have won just once on the home soil of an opponent – away to a fairly abject Zebre in October.

The extenuating circumstances being experienced by Connacht at the moment are not all that unusual so, perhaps not all that extenuating as a result. An injury crisis at Christmas is something this side has seen before, most recently, just 12 months ago. Connacht finished this game in Belfast with the seven fit backs they had left in their squad, a third choice tighthead and a hooker covering loosehead prop.

Injuries are injuries, Danie Poolman took a knock to the head in the first half as did Finlay Bealham, Ultan Dillane hurt his ankle late on trying to turn and present the ball in the tackle after a brilliantly defiant impact from the replacements bench for the previous ten minutes. So in short, it seems clear that none of Friday’s three key injuries could be attributed to anything other than bad luck.

In fact each of the 20 key injuries to first team capped players within the squads will have its own logical explanation. In the background, the medical staff will obviously be spending some time considering the processes involved in recovery and the causes of these knocks to see if there is more than just bad luck at play. It wouldn’t be very prudent not to critically analyse when such bad luck is inflicted on their squad so regularly.

The injury crisis is paramount to any report on this Christmas weekend defeat in the north. The local welcome for Connacht from the sold out home crowd was as warm, gracious and genuine as ever from the Ulster rugby family. Their team aren’t firing on all cylinders and fell well short of their best this contest too but they did more than enough in defence to shut down Connacht’s energetic and lively attack play.

Most teams have fully got to grips with the westerners at this stage but few teams can handle the men in green when it comes to the Sportsground. Leaving aside those first two games in September when the botched pre season (hardly an act of God but not the players fault either) was to blame, Connacht have dug out big wins through grit and determination with a smidgen of world class skill when needed.

Away from home the grit and determination isn’t enough for most teams and Connacht are no different, their skill based gameplan focused on high octane attacking rugby from anywhere then becomes easy to defend, especially when they fail to use the space that is in front of them when teams like Ulster or Wasps or even the Dragons push up on them with a blitz defence and fully prepare for attacks from anywhere.

In the first half, Jack Carty executed a perfect chip into space for Quinn Roux to take and make a massive 50m gain from his own 22 metre line deep into Ulster territory, that was a rare kick. In the second half, Matt Healy had a chance to do something similar but chose to kick long into the the hands of electric Charles Piutau and Connacht suffered as a result, afterwards Pat Lam pointed to that moment as an example of why kicking shouldn’t be the first option.

Overall though, the game was no classic, Ulster led 13-0 at half time, Connacht were worth more than that but more visits to the Ulster 22 that yielded nothing compounded their frustrations. Ulster’s try came from a lineout in their own half, a brilliant sweeping move sparked by Piutau finished by Stuart McCloskey but very much born from a major misread in defence as the new centre partnership of Rory Parata and Danie Poolman got to grips with their role.

After half time, Ulster seemed to seal the win when Corkonian Clive Ross charged over the line for try but they eased off and were caught by a brilliant Connacht move which saw Tiernan O’Halloran set up Jack Carty for the try. At 20-7 the game was still in the melting pot to some degree but an error in midfield saw Ulster charge back into Connacht territory and seal the win with a Paddy Jackson penalty.

The injuries pile up and the away defeats keep coming but fortress Sportsground is keeping the season on the tracks all the same. In Europe, Connacht are neatly positioned, in the Pro12, they are snookered but not out of the running for automatic European qualification just yet, that said, they are going to have to go on one almighty run of wins in the spring in this competition and to that, they’ll need a little help from lady luck.