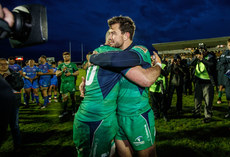 The Connacht performance in this match was like watching the clock being turned back 4 years, to the pre-Pat Lam era when performances like this were not as anomalous as they are now. The first half was an especially gutless display. There will be no Champions Cup rugby played in the Sportsground next season based on that display.

The fact that the match was a dead rubber for Connacht didn’t help their cause, especially with Scarlets coming to the Sportsground fully loaded. They arrived at the Sportsground needing a victory to confirm their place in the PRO12 semi-finals and by half-time their mission was effectively accomplished.

Connacht had a number of players returning from long absences. Darragh Leader had not played at this level since December 2015, it was only Marnitz Boshoff’s second start for Connacht and Eoghan Masterson began a match in the PRO12 for the first time in over a year.

Conversely Scarlets had their three 2017 Lions on show and a plethora of Welsh international players spread throughout the team. The difference in class was evident almost from the start.

Connacht started brightly but were unable to turn early pressure into anything substantial, whereas with their first possession of the match Scarlets eviscerated the Connacht defence to score a majestically created try down their left wing, with Kiwi fullback Johnny McNicholl touching down and Rhys Patchell adding the conversion for an early 7 point lead.

The home side showed some characteristic ball retention over the next few minutes and eventually forced an offside in the opposition 22 and Boshoff slotted an easy 3 points.

The next 20 minutes of rugby were probably the most abject in the whole of Pat Lam’s campaign. Two tries from young wing Steffan Evans were quickly followed by Lion in waiting Liam Williams dotting down on 31 minutes to nab the west Walians a try bonus point with well over half the match still to play. It is the first time that Connacht have conceded a try bonus point in the first half of a PRO12 match since doing so against the same opposition back in April 2010, when they lost in Parc y Scarlets by 58 points to 10.

The PRO12 champions defended like they had only met each other that day. All four tries were scored with relative ease as the Scarlets easily created overlaps down their left wing, whether there was an ocean of space, or what appear to be very little room to play in. The lack of communication between the Connacht players in defence was deafening.

The second half had very little bite with the result a foregone conclusion. However, Connacht did raise their game a notch or two when John Muldoon and Quinn Roux came on to add a level of aggression to the game that had been sorely missing.

Craig Ronaldson got on the score sheet for Connacht after some decent front foot ball, for once, gave the back line an opportunity to show their undoubted skills. But Boshoff missed the conversion, following an early penalty miss, that ensured that there was no real inkling of a possible comeback.

Rhys Patchell put the game beyond doubt with a simple penalty and DTH Van Der Merwe put the icing on the cake for the visitors with his 9th career try against Connacht in the last minute of the game.

The presentation ceremony at the end of the match to all the players who are moving on to greener pastures next season was emotional. This game was a sad way to see off the likes of Danie Poolman and John Cooney but especially a true gentleman of the game, and a true Connacht stalwart, Ronan Loughney.

There is a possibility that this won’t be Pat Lam’s last game in the Sportsground and that he will get a more fitting send-off, but the feeling in the rather subdued crowd was that this was the end of an era.