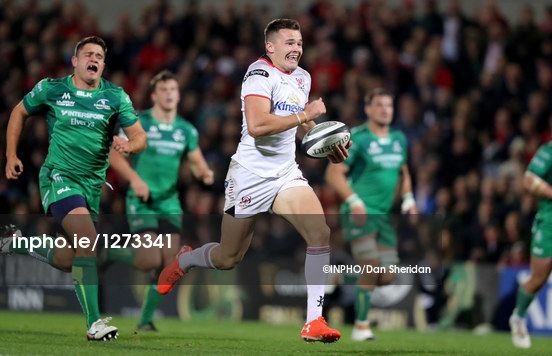 By Rob Murphy at Kingspan Stadium

It is hard to credit the mood around Connacht right now.
There’s certainly optimism around the group and an air of defiance too. They might have only managed one point from the last two but there is no denying that they turned a corner in terms of performance levels and discipline.
After the low of the Cardiff home defeat, the future was looking a little more positive as the Connacht bus drove out of Belfast on Friday night.

One win from six is still the cold reality of the season so far but, in that regard, the real damage was done in September.
These past two games, in Ulster and before that in Llanelli, were about knuckling down and beginning the recovery of this campaign.
Victories were always highly unlikely away to two of the league’s leading sides, but it would be churlish to ignore how close they came to winning both of these daunting fixtures.

Ulster weren’t in top form by any means here. Fresh off a loss to Zebre in Parma, they looked nervous and out of kilter at times.
That certainly played a part in Connacht being so competitive.
In fact, had the home side finished off even one of their two golden opportunities for tries early on, the victory might have been achieved with a lot less fuss.

As it was however, Connacht stayed in touch during a tricky first half hour thanks to a an ever improving defensive effort, a rock solid lineout and a scrum that was dominant.
Bit by bit they grew in confidence and by half time they were ahead off the back of a Tom McCartney try, which came at the end of a scintillating period of attacking play that saw Bundee Aki heavily involved along with a host of backs and forwards.

The second half started a breakneck speed with the crowd on edge and the lead changing hands right up until the defining moment of the contest in the 56th minute.
A searing break from Connacht from their own 22 saw Jarred Butler and Steve Crosbie combine to release Matt Healy.
The winger made 40 metres but elected to chip over Charles Piutau when the pass was on, it was a costly error that led to a try at the other end.

Ulster’s perspective will be completely different.
Their media will forget the brilliance from Connacht and focus on the wonderful counter attack that saw the million pound Bristol bound full back Piutau and young under 20 Irish sensation Jacob Stockdale on a glorious one two to score one of the tries of the season.
Connacht’s perspective will be one of bad decisions and soft broken field defence.

Dissect it as you like, the main point is it was a moment to savour for an agitated home crowd.
It put two scores between the sides, and Connacht were never coming back from it despite some toil and endeavour in the closing 20 minutes of the contest.
In fact the visitors ended up with the better possession, territory and line break stats in the contest. All academic.

It’s impossible to ignore the improvements that Connacht have made in recent weeks.
The level of compete has risen spectacularly from what we saw in the opening four games.
There’s a level of retrospective story telling going on in some corners, to equate the poor start to an expected teething period under the new coach. It might be true, but no one was flagging that the day before the opening clash with Glasgow. It suits the narrative.

Truth be told, there are a number of elements. One of which most certainly has to be a feeling that the coach’s ideas took a little bit longer to hit home than some had anticipated.
Keane needs a lot more time to really stamp his philosophy on the camp but already their are signs that this is a new world from the Lam era.
The attacking play feels more fluid and responsive to the conditions and the balance of play for example.

Beyond the coaches influence, there’s a clear sign that the players are stepping up from their sluggish efforts in the opening round.
The endeavour from Bundee Aki for example has never dropped. But he is finding more space for others in the last two games, and his combination with Tom Farrell has stood out.
Jack Carty has now put two stellar displays back to back in the out half position. Eoin McKeon is like a man reborn in the back row.

Throughout the team there were plenty of other good performances too.
But in the main, the collective discipline has improved immensely and in this game in particular, bar a shaky start, the defensive structure has looked rock solid.

All is not perfect however, the last ten minutes saw Connacht turn down a losing bonus point in search of a try that they never looked like scoring.
The driving maul was ineffective on multiple occasions while their back play in the 22 was pedestrian and easy to contain, especially in those last few minutes.

Line in the sand

This might have been the line in the sand period of the Keane era, where the team stood up to be counted, performed well in defeat and built a platform for an upsurge in form, time will tell but results are going to be the only barometer that matters in the coming couple of weeks as Connacht take on French strugglers Oyonnax and winless English outfit Worcester.

As usual, Keane wasn’t afraid to get to the nub of the matter afterwards. “We’re searching for some momentum and we need it desperately. Otherwise heads will drop and people will lose confidence and so on” before reassuringly adding “but I think we’ll be okay.”