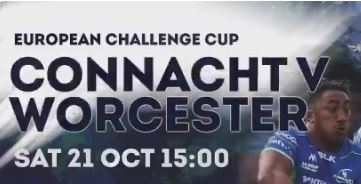 Connacht return in better form to the Galway Sportsground for the first time in a month, having broken their spell of near misses to record a deserving victory in Europe.
It was a win coach Kieran Keane believed would happen sooner rather than later, and when it came in the unusual location of Geneva against French side Oyonnax in the Challegne Cup, it was an emphatic one.
A 43-15 victory of five well-worked tries ensures Connacht are now in a better space to host fellow pool five bonus-point winners Worcester on Saturday at 3pm.

Keane’s side will not find the English outfit quite as easy, despite Ben Te’o (high ankle strain) and David Denton ruled out. But to continue the momentum and maintain their pool five lead, Connacht must win.
They will need to exploit home advantage and the English side’s poor defensive record in a game that could have a huge bearing on deciding the pool winners.

Connacht forwards coach Jimmy Duffy knows Connacht will have to be better again to maintain their lead.
“You know when you play premiership sides they have a strong set piece and are big, big men, and they like to impose themselves all over the field. They have a lot of experienced players, sprinkled with quality, so we are keenly aware of their potential.
“We expect Worcester to back themselves. Against Brive, they showed their professionalism. Both sides came to play, and it was a hard-fought battle.
“They have a have a lot of quality players, a lot of experienced players, including Donncha O’Callaghan and Peter Stringer. We are keenly aware of their potential.”

Duffy says last weekend’s win in the Stade de Geneve was a morale booster.
“At the minute we are starting to see the benefits of it, guys are clicking, combinations are working, and the injury list is quite favourable. All of these things help and build confidence. Winning in Geneva was great, but we need to be better again.”

Several players will be in contention to line out against Worcester, including the possible return of Tiernan O’Halloran from a hip injury, and players who were rested, prop Denis Buckley, outhalf Jack Carty, and Bundee Aki, whose playing time, along with Kieran Marmion, is being monitored due to possible international duty for the Autumn Internationals.

One player who will not be taking part in this season’s action is Fijian centre Eroni Vasiteri who now will not be joining Connacht after his recent ban for eye gouging in Australia.
“Like everything else, we are in a pretty good space in terms of injury, apart from the couple of long term players which everyone knows about. Players are fit and keen to go, and hopefully the weather is behind us.
“It is great to be back at the Sportsground. We have three weeks now of home games, but we are keenly focused on Worcester first. We then have Munster and the Cheetahs, so three different games.”

The run of home matches is coming at a good time for Connacht as they appear to be finding their rhythm under Keane, and the former Chiefs’ assistant was understandably delighted with Connacht’s performance against Oyonnax.
“Really pleased, a long time coming,” Keane said. “It’s great for us, a new competition the Challenge Cup, gives us another aspiration. “This is the momentum we were searching for, so foolish not to make use of it. The challenge now is to back it up.”

Connacht made use of the 30,000 seater stadium’s artificial playing surface to up the pace against a more physical Oyonnax side, and although there were a couple of hiccups in the opening half, Connacht never relinquished control. They kept their opponents scoreless in the second 40, finished with a flourish, and looked like a side playing with renewed confidence.

“We back our fitness and our willingness to move the ball about, it was an obvious tactic to use and it paid off pretty handsomely. We took the foot of the throat a little, and they did come back, but I felt personally good.