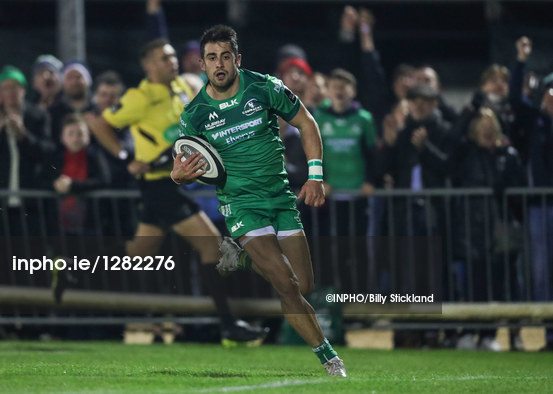 This was clash of styles and a triumph of creativity and ingenuity over brute force and ignorance.
Connacht offered more in almost every facet of the game making more yards with ball in hands, beating more defenders and scoring the extra try for good measure.
Munster’s only positive was in their kicking game but that one dimensional game plan was never going to be enough.

It is quite likely that Munster will still end the season well ahead of Connacht in the standings.
They will continue to have more internationals (11 in the Irish squad as opposed to three from Connacht), and they remain a more likely challenger for the PRO14 title too.
Yet on the evidence of this Friday night tussle in perfect Galway weather, you’d have to wonder why.

The answers are hard to find. It’s not that Munster were completely outclassed here.
The men in red edged the battle of the half backs and the back row, broke even in lineout play and certainly didn’t yield much in the tackle area.
Connacht had their areas of advantage though. The front row out-powered their opponents and by the end of the game.
The backline play eclipsed anything Munster had to offer.

Yet when Joe Schmidt assembles his Ireland training camp next week, players like Chris Farrell, Darren Sweetnam, Andrew Conway, David Kilcoyne and John Ryan will be in the room.
On the basis of this night alone each could be directly and justifiably, replaced by the likes of Darragh Leader, Tiernan O’Halloran, Tom Farrell, Denis Buckley and Finlay Bealham.

One win isn’t enough though yet that won’t stop Connacht supporters enjoying this.
In fact as the crowd watched Bealham send David Kilcoyne backwards at a rate of knots to win a penalty at scrum time midway through the second half.
Those with green scarfs must have had a wry smile at the thought of the man they call ‘killer’ down in the south, earning caps while the Connacht tight head isn’t even in the squad.

The wider point is this. Connacht need consistency. There is no hiding from the fact that this group of players failed to deliver in September and are suffering the consequences as a result.
With the benefit of hindsight all involved are pointing to the fact that the bedding in period took longer than expected and that explains a lot of the struggles.

However, there seems to have been an attitude shift since this side trudged off the Sportsground pitch after the last gasp loss to Cardiff. The palpable frustration from management and subsequent introspection from players over the week that followed seems to have paid dividends.

Ever since that game, Connacht have offered an average of three tries per game. They’ve performed well away to the Scarlets and Ulster. They have notched two wins in Europe and now have the home inter-provincial scalp that they needed.
This game was always going to be the true marker of where things stand and after a sketchy start Connacht passed the test.

The visitors were 10-0 up by the midway point of the first half. Simon Zebo’s early try was the culmination of a ferocious opening from the the men in red.
Wave upon wave of big carries, with Rory Scannell eventually setting up the try after the ball came loose out the back of the scrum and the centre picked it up before taking advantage of the over-pursuing Connacht defence.

Connacht fought back by half time with Tiernan O’Halloran’s try the highlight.
It was made by some ingenuity between Bundee Aki and flanker Jarrad Butler.
The latter took a superb looping angle and shrugged off a tackle before drawing his man and setting O’Halloran free to score.

An in-form Keatley kept Munster in front but only by 13-10 at the break.

After half time Jack Carty leveled matters with his third kick from four attempts.
But the game’s turning point came on the hour mark when Conway clattered into the Connacht ten late and leading with the forearm. The replays didn’t make it look any better and there was no other option for Nigel Owens but to brandish a red card.
Munster responded impressively with a kick from replacement fly half JJ Hanrahan coming at the end of some good pressure.

But Connacht were not to be deterred and the match clinching try came on 67 minutes with Tom Farrell bursting through a Hanrahan tackle 35 metres out and sprinting clear to score. The pass from Marmion looked forward but Owens reviewed it briefly and clearly didn’t agree, the lead was now four.

It wasn’t a perfect display by any means. Connacht finished the game scrambling to stop the 14 men of Munster mauling over their line and tackling with unrelenting intensity.
They weren’t exactly hanging on but they hadn’t driven home the advantage either.
Yet after the nightmare start to the campaign, the manner of the victory was not a high priority.

The clash of styles is best summed up by the showdown at number seven.
Butler brings the Australian flare and speed in the loose, he had nine carries and made 42 metres with two clean breaks to lead all forwards in that department.
Tommy O’Donnell barely handled the ball but hit players hard all afternoon making a game high 16 tackles. There is room in the game for both types of sevens but the contrast is striking.

The South Africans are next and the injuries are mounting. Butler picked up a knock to the knee that will keep him out until mid December at the earliest, James Connolly and Jake Heenan are also out in that position.

The Cheetahs are eight points clear of Connacht in the standings holding onto the third and final play-off spot in Conference A.
Saturday’s game at the Sportsground is pivotal as a result. The men from Bloemfontein are in great shape after their win away to Zebre in Parma and confident that they have what it takes to push on up the standings.
One wonders how they’ll handle a skillful and buoyant Connacht.