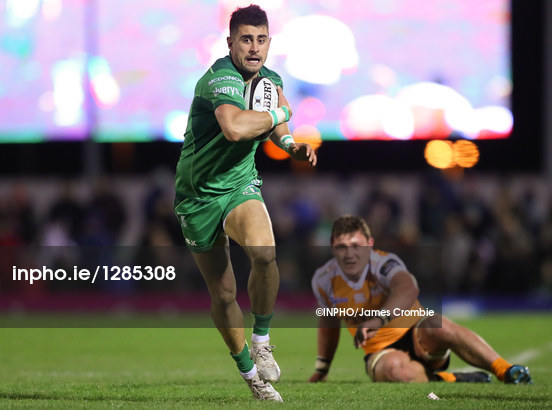 Say what you like about the opening ten games of the season but don’t try to say you’ve seen it all before.
There’s something very different about this Connacht squad under the new coaching team. From the game plan to the overall philosophy, from the levels of accountability to the all round attitude. The Kieran Keane era is up and running. The settling in phase is well and truly in the rear view mirror.

Saturday night’s scrappy win over the new additions to the competition, the Bloemfontein and Orange Free State based Cheetahs, had very few highlight moments from the men in green beyond a wonderfully crafted bolt from the blue sort of try from the fit again Niyi Adeolokun during the first half.

Outside of that, it was a workmanlike effort that turned out to be just enough to garner an eight point win and deny the visitors even a losing bonus point.

The late rally from the Cheetahs served only to underline that this was a poor Connacht display against the visitors who had been forced to travel without four key backs that had been called into the South African squad.
It was the final game of a ten week run of rugby before a welcome two week break. It was a must win against a key Conference rival.

Ten weeks into the season and everything seems to be laid out clearly.
Keane is different. He’s honest and forthright.
He’ll grumble when the performances are not up to scratch and dish out praise when they are. Talking to him after games feels more like a fly on the wall style documentary than the kind of carefully crafted scripted media diatribe we often get these days. That certainly is refreshing.

The PRO14 campaign started badly, very badly in fact. With one win from six but after a couple of good results in the Challenge Cup, Connacht bounced have back during the last couple of weeks. With these two key home wins over Munster and the Cheetahs and now sit fourth in the Conference A standings, four points behind the South Africans in the race for the third and final playoff spot.

Even after just eight of the 21 rounds we can make some assumptions.
Glasgow are runaway leaders and almost certainly won’t be caught. They’ll be the automatic semi finalists from the conference.
Munster should finish second and get a home quarter final play off place unless the management team upheaval leads to more performances like we saw in Galway last week.

That leaves the third and final play off place. For the moment the Cheetahs remain in pole position despite this fairly average effort on Friday. Their home form is electric.
As expected teams struggle in the heat and high altitude.
Also, they have three games against the winless Southern Kings ahead of them. So a handy 15 points there. Catching them won’t be easy.
Heck, Munster might be an easier target.

The minimum target will be champions cup rugby. Connacht must finish among the top three European sides in their conference to secure that.
Put more simply, as it stands now, if they keep the Ospreys, Cardiff and Zebre below them, they’ll be back in the big time for 2018/19.
When the PRO14 returns in late November, away trips to Cardiff and Parma are next on the fixture list. Needless to say they’re vital.

You might point to this reality for reasons why Keane was so frustrated after this victory.
You might argue that he knows a much better display will be needed to get the big away wins they need in the coming weeks but he really doesn’t seem to be a bigger picture guy.
It’s the day to day stuff that gets his goat up and when he say’s that his side “weren’t there mentally” on Saturday, he’s only concerned with this one game.

He went further suggesting the performance was no more than average and lamenting the fact that the “massive strides” made against Munster had been undone in terms of defence.
“That’s the real head scratcher to me is how we can revert back to a pretty average defensive from what we did the previous week.”

Connacht led 13-3 at half time, Adeolokun’s brilliance the key difference, with Craig Ronaldson adding the extras and a couple of penalties. After half time Connacht scored first after a frenetic ten minute period. A little half break from the aforementioned Adeolokun helped here too and after a series of phases on the line Tom McCartney crashed over.

At 20-3 the game should have been done and dusted.
Had Connacht not suffered a litany of injuries perhaps it would have been. Or maybe even allowing for those injuries had they just executed some straight forward lineouts and basic defensive patterns.
They botched three attacking lineouts in the last half hour with Dave Heffernan on the throw, and missed an alarming number of tackles as the Cheetahs fought back.

But Steve Crosbie crucially notched a penalty in between those scores to keep the visitors at arms length. It was unnecessary late drama.
Whereas most coaches would have pointed to key injuries to Eoin McKeon, James Cannon and Craig Ronaldson which ultimately led to them finishing with three props on the field, Keane is not one for excuses.

The reaction to the unorthodox media communications of the coach so far has been good from the players, their body language and work rate has transformed in a positive way since the end of September after a start that included key defeats to Glasgow and Cardiff at home.

The contrast in approach to what they would have experienced under Pat Lam is stark but it might be just the trick for them to move on to the next level.

The next two games in Wales and Italy should be very revealing in that regard. Ten games gone, maybe as many as 19 still to play and already this season is providing some compelling sporting drama on and off the field. Can’t ask for more than that in these parts.