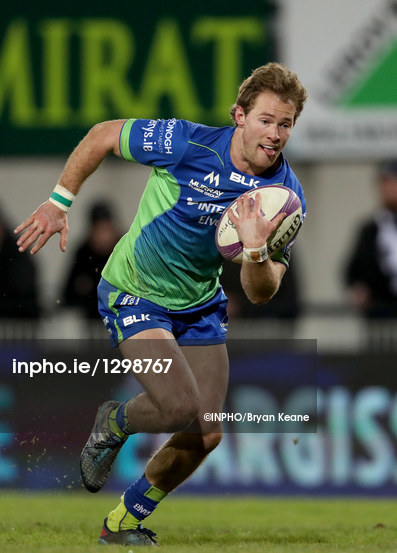 Another European thriller and another European win for good measure. The Challenge Cup is like an oasis in a desert for Connacht these days. If Kieran Keane really does need time to get the best out of this squad, this competition is proving to be a key component in that area as his squad are playing a more balanced and effective game in Europe when compared with their PRO14 efforts.

On a cold but dry night in Brive, Connacht initially looked as troubled as we saw them in Parma against Zebre a week previous. Disjointed, ponderous and ill disciplined and boy did they suffer for it. By the 30 minute mark they had conceded eight penalties to one, watched as captain John Muldoon was sent to the sin bin and shipped three tries during the half hour spell for good measure, leaving them 19-3 in arrears.

Yet by the half way mark they were a different team, with their backs to the wall and another show stopping result in the making, a whiff of calm seemed to come over them and after a neatly worked training ground move helped by a perfectly timed run and clean line break from Tiernan O’Halloran, Ultan Dillane scored a try to turn the tide and set up a big fight back.

From that point to the game’s end, Connacht seemed in control. They had blips along the way conceding two more tries for good measure but in terms of attacking play and overall accuracy, they were very much a different side. Jack Carty had played his part in the team’s early struggles but he also proved to be the master at the helm for the fightback, turning his own game around and dominating at out half right to the end.

Carty had a masterful display during the second half here, the kind which we have seen from him time and time again over the years against all manner of opponents from Toulouse in the Stade Ernest Wallon, to Munster in Thomond Park. The jury has long since returned a verdict of capable of top class performances on the Athlone man, it’s just that run of form that eludes him at the moment.

It’s not for the want of analysis and trying, Carty’s first point in the post game press conference was to highlight the two poor kicks in open play that cost Connacht. Some would say he shouldn’t focus on the negative but each to their own and it seems to be part of a process that allows him to both accept the errors and use them as motivation.

Having first noted that “We had to scrape to get back into the game.” he then expanded on why his errors were still on the mind a half hour after a great win. “I was aware but I felt I had to move on from them, I felt good, it was just about not compounding those errors once they happened.”

Therein lies the point, Connacht have made some errors this year, they have been very very poor at times in fixtures away to the Dragons and Zebre or the home defeat to Cardiff but those results don’t have to define the season and there are shreds of evidence emerging from Europe that would suggest much like Carty within this game, Connacht might yet turn this around.

Of course, there’s a long way to go, Brive had only three frontline starters here and included three full debutants in their squad. Connacht had 20 year old Cillian Gallagher making his first start, (and wow, did he look comfortable, even out of position in the back row rather than lock) but this was their best available line up.

This is a major objective and they are in a group with three struggling sides who are far more concerned with relegation tussles in their domestic leagues, so results like this are expected. Yet Keane will be all to aware that a home quarter final could set his side up for a pretty eventful spring and act as a catalyst for his three year plan as a whole. In fact, his project might have been a lot more challenging had Connacht snuck into the Champions Cup this season.

To tell a detailed tale of this game would require a book longer than a Christmas Tale but the short version should fill in the gaps nicely. Kieran Marmion followed up with Connacht’s second try after Dillane’s effort to make it 19-17 at the break and Carty’s early second half penalty had Connacht in front for a brief moment.

Just as all seemed to be flowing west, Brive hit back with another lineout take and maul that proved truly unstoppable to go back in front. Undeterred, Connacht scored 18 points unanswered over the next 20 minutes including two special tries and a couple of neatly struck penalty kicks from Carty.

It was that man Carty who scored the first of those tries, a brilliant piece of opportunities saw him break clear through a huge gap after the Brive defence fixated on Bundee Aki and Pitta Ahki and neglected their basic duties, the Buccaneer didn’t hesitate and after a searing break he then completely bamboozled Germain at full back with the dummy before sprinting home under the posts.

The bonus point try was finished off by a highly effective Cian Kelleher after a neatly placed kick through from Carty but Connacht did make hard work of killing off the tie as Brive rustled up one more attack of their own to score a fifth try and pull within seven. It was nothing more than a blip as Connacht looked steady in the closing seconds.

This was far from a perfect display from a team that is taking their knocks from within and outside the camp. Better displays in the PRO14 will dispel a lot of criticism and some of the bravery and composure on show here when they trailed by 16 points could well point the way forward in that regard. If it all works out that way, Keane’s love affair with this competition will surely blossom.