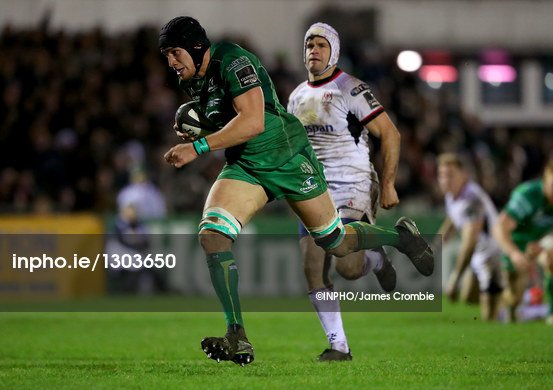 So Connacht finish 2017 with their best performance of the year and a record breaking one at that. Highest ever points haul against a provincial side and a biggest ever win over Ulster. It was a seventh win in nine outings to end the year and they now roll into 2018 in good spirits with plenty to be optimistic about.

Perhaps the Leinster and Munster away fixtures in the coming weeks will bring the men in green back down to earth, but for the moment at least, the glass is half full at the Sportsground and Kieran Keane is looking like an emboldened figure in post game press conferences.

The New Zealander has only once before led a professional coaching team and that was at the Tasman provincial side where he took them to a Division 2 title before leaving them on a strong footing in Division 1. His work as a backs coach with the Chiefs was well renowned and his technical expertise fairly widely regarded but the head coach position can bring an added spotlight, especially in this part of the world.

Overall, he’s handled this new element in his own unique way and the post game press conferences are invariably engaging and informative, sometimes feisty and unusual and never anything short of entertaining.

Saturday’s was no different. Keane batted away any questions that veered off the game, the ones looking for a simple headline about new contract extensions etc and at the same time he spoke openly and honestly about how this results win might be a “turning point” in the season and might lead to his side and the Connacht rugby organisation as a whole being taken “a little more seriously.”

In this run of nine games, Connacht have remained near perfect in Europe, winning four from four in the Challenge Cup and while picking up PRO14 wins over Munster, the Cheetahs and Ulster in the PRO14. Heck they even managed to notch two valuable bonus points in one of their two away defeats during the run but that second loss was a stinker in Parma and perhaps dominated the headlines for longer than Keane would have liked or even expected from his New Zealand experience.

He has bristled since the week after that encounter but he might well be quietly pleased at how it’s all panned out. There has been a bit of a ‘circling of the wagons’ in recent weeks with the free scoring wins over Brive back to back before this stunning effort on a good night for rugby, slight winds but with mild temperatures.

The start to this contest spoke volumes of the side’s new collective sense of mission. As a group, they seem on the same page and determined to deliver on this new ethos of rugby that has probably taken a while to get to grips with. The line breaks are now coming in waves, 21 to 11 here and the opposition defenders are missing tackles against the men in green at a remarkable rate too.

Bundee Aki is back and beating a fair chunk of defenders on his own. He made 85 metres with the ball in his hands and on eleven carries, he beat six defenders. He has varied his game in recent weeks to either be a defensive stalwart or an electrifying attacking threat depending on tactics and opposition. In this one it was all about the attack play and Ulster had no answer for his prowess.

John Muldoon was back too and after a much needed break he was the teams key man for tackles leading the way with 12, he kept the carries to a minimum leaving that to his comrades in the backs. The back row trio as whole excelled, Jarred Butler is only just back from a two month injury lay off and put in a remarkable shift considering while Eoghan Masterson had a try and another stunning effort at blindside flanker.

But back to that start that we spoke of, Connacht had two tries scored by the ten minute mark. Ulster were static, Connacht were on the tip of the grass and bursting with energy from the opening whistle. The first try was a bulldozing maul, the second was made by a brilliant kick return from Tiernan O’Halloran who was Connacht’s most prominent ball carrier with 92 metres from 12 carries.

O’Halloran’s efforts set Matt Healy on a break before Kieran Marmion made another half break to assist Aki on the second try. The new Ireland star had work to do but kept his balance brilliantly after a half tackle and finished under the posts.

Ulster hit back through John Cooney’s penalty after a better spell of about ten minutes but from the restart, Matt Healy rose highest to win possession and on the next phase, O’Halloran was at it again, bursting through cover tackles and charging all the way to the line for try number three.

The second half saw no let up. Connacht kicked a couple of early penalties through Jack Carty after some rip roaring attacks to lead 23-6 and Ulster’s scrambling defense racked up the penalties and the yellow cards with Andy Warwick and then Louis Ludik heading to the bin. That made resistance next to impossible and the inevitable fourth try from another maul soon followed with Ultan Dillane getting the touchdown.

Often in the one sided fixtures, the final quarter can be disjointed and while this had elements of that, it also had plenty more tries, Ulster had a couple of consolation scores but they also had to endure some showpiece rugby from Connacht as the scoreboard ticked on with Butler finishing off one move and Dillane running ninety metres to support Darragh Leader and Eoghan Griffin on another attack. It was party time and the ‘jingle bells’ singing from the crowd underlined as much.

Ulster were poor, they came to town without three key backs and four vital forwards and they left with tail between legs. In the past, Connacht sides would have also won this fixture but not with such ruthlessness.

Above all else, this is the kind of scoreline that will send out a message to opponents in all competitions and Keane looked like a man who knew only too well that score lines like this can change narratives and shift perspective. So forget about Zebre and instead savour the bigger picture. After a stuttering 12 months, Connacht appear to have found their mojo again.