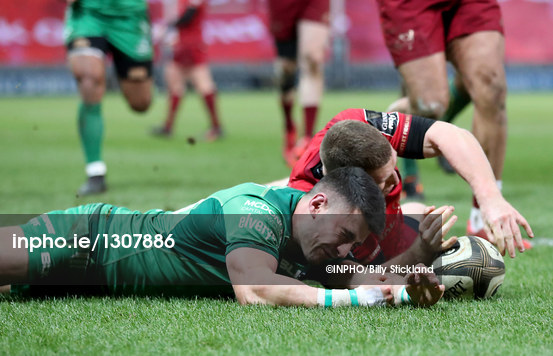 Six points from three games isn’t a bad return for Connacht, from their Christmas interprovincial endeavours.
They can honestly feel they moved the project forward even if the last 20 minutes of this contest on Saturday were very much a negative number in the ledger.
This was Munster at their ruthless best against their depleted opponents as they turned a tight encounter into a five try drubbing in no time at all.

It’s hard to remember an inter-provincial fixture in the professional era where Connacht had to rest this many key front line players.
Bundee Aki, Kieran Marmion and Ultan Dillane are now firmly established in the Joe Schmidt camp and are managed accordingly, like all their Irish teammates, they had to see a week off somewhere over the Christmas period and this was the game Kieran Keane chose.

The Connacht coach didn’t stop there. Eoghan Masterson had gone through a mountain of work in the previous four weeks and was rested too, along with two more who had seen a lot of action in the shape of Tom Farrell and Finlay Bealham.
With a key Challenge Cup trip to Worcester on the horizon and the PRO14 primary objective unlikely to suffer as a result of this loss, Keane is hoping that this management of resources will keep them on track on both fronts.

For 50 minutes it looked as though the whole plan was coming together perfectly. Connacht had frustrated Munster to that point.
They trailed by just four points and were seemingly in charge in terms of set piece play.
Their scrum was completely dominant and two early second half lineout steals suggested Munster were really feeling the heat after consecutive defeats to Leinster and Ulster.

The turning point in the contest involved some questionable officiating from David Wilkinson and his crew but to focus heavily on his call against John Muldoon that led to three points (where he appeared on his feet and first defender into the contest) or the decision to award Andrew Conway’s try (where a knock on seemed more likely) would serve only to muddy the waters here.

Munster had put themselves in attacking positions to take advantage of such decisions. A wondrous break from the simply brilliant Keith Earls actually paved the way for that Conway try.
While upfront, inch by inch, almost imperceptibly in fact, they had managed to turn the entire contest their way after half time. Winning each contact and repelling some promising early attacks from Connacht.

After the game, CJ Stander spoke openly about the dressing room chat he had with key teammates at half time noting that he had said to Conor Murray and Ian Keatley that it was “on us to change this.”
That kind of leadership from three men in the crucial ‘8, 9, 10 axes’ will be pleasing for new coach Johann Van Grann and should prove vital in the forthcoming European ties against Racing Metro and Castres.
Such collective accountability had been missing before Saturday.

If you allow for the caveat that a 26 point defeat is a drubbing and a set back no matter how you package it.
You can still make a case for some real positives to be taken from this week.
Especially as they came after the side produced a hugely impressive set of performances against Ulster and Leinster away in previous outings.
More than anything else this game at cold and blustery Thomond Park late on Saturday evening underlined the sense that the Connacht squad is deeper (or perhaps less injury ravaged) than at any point in recent memory.

The Connacht scrum was a huge positive and must surely be adding to Joe Schmidt’s list of reasons to look for paracetamol.
Munster’s four match-day squad prop forwards are all key members of Ireland panels but they were completely outplayed here by a Connacht front row that started with back up tighthead Conor Carey (who again showed why he’s unlucky not to be first choice) and loosehead Peter McCabe making his first start since joining from Munster.

Both men, dominated winning four first half penalties from David Kilcoyne and John Ryan and even when the fresher combo of James Cronin and Stephen Archer came on, the duo held firm.
Add to that the fact that former Irish under 20 Sligo man Conan O’Donnell marked his return from long term injury with some good moments in a a late cameo and you have a fairly complete display in this department.

Elsewhere, another Sligo man, Cillian Gallagher again demonstrated his prowess in the role of blindside flanker.
The 21 year old is not just a prospect any more, he’s a serious option for Keane in the flanker and second row roles.
In the backline, Connacht probably didn’t have enough ball to be fairly judged but overall, there was little or no stand out moments until right at the end when Craig Ronaldson marked a rare appearance with a brilliant break that led to a late try from Tom McCartney.

Munster had led 10-6 at the break, Darren O’Shea with their try after a series of patient phases in the Connacht 22.

Jack Carty had notched two kicks for Connacht but a failure to get to grips with the slightly favourable wind through a reluctance to kick, probably meant that the scoreline favoured the home side more than the four point margin would suggest.

The ten quick points from those two questionable decisions were game clinchers in a sense but it was the scores that followed that really drove home the huge margin of victory.

Keith Earls had his side’s third try within six minutes.

And not long after that, Quinn Roux was in the sin bin after a tip tackle on the Munster winger. He was very fortunate under the stricter new laws not to have seen red for a needless and dangerous effort to halt the dominant Munster man.

Conor Murray had two further tries during that spell before McCartney got Connacht’s consolation score – bringing a roar from the travelling support that merely served to underline for the first time all evening how many westerners had travelled south for the journey.

As the winter continues, despite some undeniable glitches, the westerbers seem to have plenty of reasons to be positive right now.