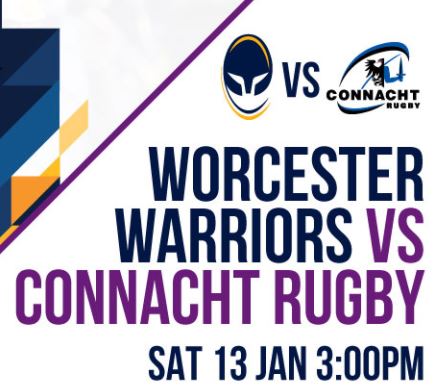 Connacht can expect a real battle of mind and body when they face an improving Worcester in Saturday’s Challenge Cup fixture at Sixways (3pm ).

This is a real opportunity for Connacht to nail down a European home quarter-final. But to do so they must overcome a Worcester side that is enjoying something of a resurgence since the wily Alan Solomons took over the reins recently.

Although struggling in the premiership, having lost 10 fixtures, Worcester’s recent home form has seen them overcome Northampton and London Irish – vital wins in their bid to stave off relegation. They also can still qualify for Europe’s knock-out stages, and with contract negotiations on going with their new boss, they have huge incentives.

As a result they remain a formidable challenge. Connacht have won the last three meetings, but it has never come easy, 15-8 this season in round two, 19-7 in Galway and 26-12 in Sixways in the 2009 Challenge Cup, while Worcester won the first meeting in 2005/6.

However Connacht have found their form in this season’s competition, unbeaten in pool five, with 19 points from their four fixtures, and still with a home fixture to play against Oyonnax. They have that huge carrot of a home quarter-final, and Duffy says no one will be taking the Warriors for granted, particularly after that robust earlier tussle in round two at the Sportsground.

“It is a good Worcester team, they have hit a run of form, and now Alan Solomons is there on a full time basis, he has given them a good bit of steel. They are well coached, have big personalities with a lot of experience, so we know it’s a big challenge.”

Connacht have “gone back quite extensively” in an eight-game analysis of their opponents, identifying dangermen such as Chris Pennell, scrumhalf Francois Hougaard, centre Ryan Mills in the backs, in addition to strong front row and back row players, allied to international quality players such as Dave Denton. And with Worcester topping the charts for turnovers won, averaging eight per game, Connacht’s physicality at the breakdown will be under pressure.

“They have good attacking players and up front are massively physical,” says Duffy. “I think they are going to produce their strongest team possible and really put it up to us.”

Available for the trip to the West Midlands is the international trio of Bundee Aki, Kieran Marmion and Ultan Dillane, who were unavailable last weekend, while openside James Connolly (calf ) and wing Cian Kelleher (HIA ) have both resumed training. The only fresh doubt is lock James Cannon who will be assessed during the week for a shoulder injury. And with youngsters Cillian Gallagher, Paul Boyle, Gavin Thornbury and Conan O’Donnell all brought into the squad for Munster, in addition to changes in the front row, Duffy says selection is getting tougher.

“There was massive excitement around the group for the interpros. As a coach you have to keep a lid on it and then open the doors and let the players away because they don’t need to be motivated during that period of time. It is the same now with Europe.

“There is a lot of energy after the weekend, but one thing we are really pleased with is that guys who were given opportunities during the interpros really took them, so it casts a different light over selection, and it means we are having longer selection meetings- that is the space we are in.”

Head coach Kieran Keane is expected to name a travelling squad that can do the business, and Aki’s presence in midfield is always a boost, particularly in these physically charged encounters. Jack Carty, who has endured a heavy workrate recently, is the only player to total 50+ points this season (53 ), (from two tries, 11 of 13 conversion attempts, and seven penalties ). And alongside Kieran Marmion, the two will continue to direct operations.

Europe has provided the “spark” Connacht have needed on numerous occasions in the club’s history, and Saturday’s joust is no different, particularly have last weekend’s bruising encounter with Munster.

However with a bonus-point win over Ulster, and a bonus-point defeat to Leinster during the Christmas interprovincials, Duffy says Connacht are moving in the right direction.

“We would have been happier with a couple of wins, but not too disappointed. For us it is about building cohesion, trying to build more depth in the squad, giving young guys experience, and producing a performance as well.

“I can’t remember three interpros in a row, and they are always big battles, and it was going to take a toll on the squad, but everyone not on injury list is now vying for action. We have bodies returning, which is good, so it gives us some options.”