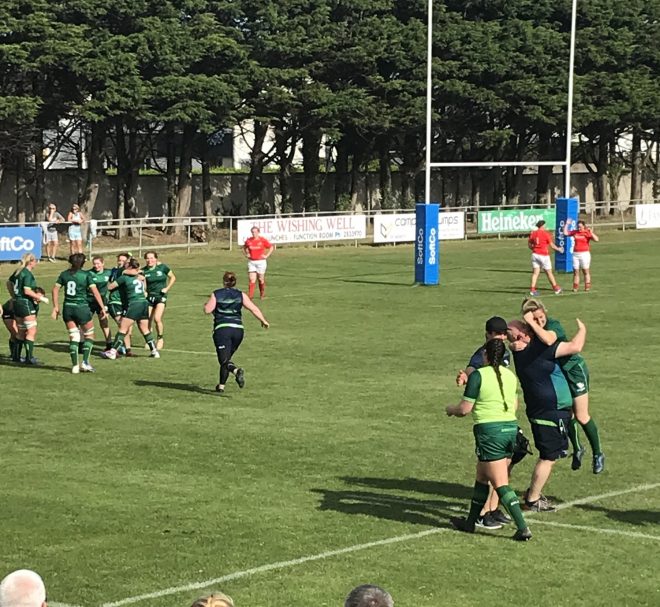 Connacht Women caused a major upset by beating a much fancied Munster team in the semi-final of the IRFU Women’s Interprovincial championship at a sunkissed, if breezy, St. Mary’s College RFC last Saturday.

Beibhinn Parsons enhanced her reputation as the wunderkind of Irish women’s rugby scoring a glorious hat-trick on her debut but she would be the first to acknowledge that it was a team effort full of grit, guile and no little amount of skill that got the women from the west into the final over a dogged and determined Munster side.

Connacht played against a stiff breeze in the first half and conceded an early penalty to give Munster a 3 point advantage with only 3 minutes on the clock with Enya Breen slotting over the kick.

From the restart Connacht got themselves right back into the match, regaining possession and moving the ball swiftly and expertly from one side of the field to the other. The plan appeared to be to get the ball into the hands of their electric back three players, the aforementioned Parsons (who is still only 17), her former U18 championship winning colleague Aoibheann Reilly at fullback and former Ireland international, and assistant coach, Ali Miller on the opposite wing.

The plan worked as both wingers made huge progress. Another player for Connacht’s successful U18s squad from last season, Maeve Deely, was directly things expertly at out-half as the pack provided quick, clean ruck ball to scrum half Mary Healy.

In a sweeping passing sequence from left to right, Reilly drew the defense and expertly fed Parsons who scored in the corner despite the grasping last ditch tackle from the Munster cover defense.

The try visibly boosted the confidence of the whole Connacht team and the forwards continued to make big in roads with Laura Feely, Denise Redmond and captain Nicole Fowley making the hard yards while centres Shannon Touhey and Catherine Martin punched holes in the Munster defensive line.

A period of pressure led to a scrum to Connacht in the middle of the Munster 22. A snappy pass from Healy fed Deely, who feinted to go one way, then ran a magical, arcing run against the grain that bamboozled the defense and poacher in chief Parsons was on hand to score her second try.

Munster reacted well to the concession of the two well worked tries and dominated the 2nd quarter of the match.

Playing the power game they tested the Connacht defense to its limit. Flankers Ciara Farrell and Edel McMahon were called into action time and again as Munster crashed against the green wall of defenders.

The Connacht scrum were in dominant mood and help clear the pressure on a couple of occasions, but Munster were not to be denied.

A poor clearance kick gave Munster possession just outside the 22 and before the Connacht defensive line could fully organise itself, the ball made its way to Munster fullback Eimear Considine who accelerated passed the cover and cut back inside to score under the posts for Breen to convert.

Using the breeze to great effect, Munster kept piling on the pressure to try and get a lead going into half time, however the Connacht defense stood strong and they bounced off the pitch at half time with the scores level.

Munster started the second half in much the same way that they finished the first, on the front foot and piling on the pressure. That pressure appeared to unnerve Connacht as they gave away penalty after penalty. Eventually the referee decided enough was enough and sent captain Fryday to the bin eight minutes into the new half.

The team in red only took two minutes to make the extra player count when No.8 Sarah Quin crashed over near the posts to regain the lead.

Whatever was said under the posts while the conversion was slotted seemed to have a galvanising effect on Connacht as they not only survived the remaining 7 minutes of the sin bin period without their captain, they started to play with the verve and abandon that saw them score their 2 first half tries.

As the game entered the final quarter it looked like Munster had lifted a 7 minute siege, but the clearance kick held up in the wind and Ali Miller expertly fielded under pressure, drew two defenders and sent a beautiful spin pass back in field.

The ball was quickly transferred into Parsons hands just outside the 22, and she used a combination of dazzling footwork and raw power to break through the cover defense and dot down for her hat-trick.

Within 3 minutes Connacht were in the lead. They expertly worked their way up field from the restart, eschewing the chance to use the breeze by keeping the ball in hand and stretching the Munster defense.

After a number of rumbles by the pack, the ball came into the possession of the now retired Ireland international Miller, who decided to show the Connacht faithful that there was more than one winger on their team who could score spectacular tries as she left a trail of would be tacklers in her wake to put Connacht into a lead that the would not relinquish.

Entering the final 10 minutes Munster used their pack to punch their way to wards the Connacht line, but the green defense held firm until conceding a very kickable penalty on the 75th minute. However the capricious breeze that had prevented Connacht from garnering any extra points for their tries now affected the kick from Munster as the ball drifted wide of the posts.

That was Munster’s last chance of a score as Connacht ended the match defending for their lives in the Munster 22. The referee eventually brought proceedings to and end after 7 minutes of injury time and Connacht were through to the first ever Women’s Interprovincial final.

The final takes place in Energia Park (Donnybrook to us old timers) on Saturday Sept 21st at 7pm.