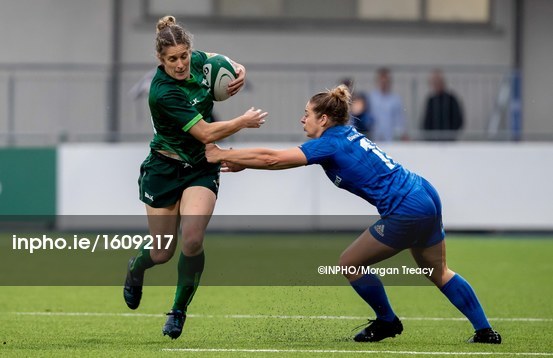 The Connacht Women put up a spirited but ultimately futile display at Energia Park in the inaugural Women’s Interprovincial Final as they were defeated by a classy Leinster team who retained their title.

Leinster are worthy champions having gone through the interprovincial series unbeaten while Connacht will take great heart from the fact that they improved with each game as the series progressed, however that improvement wasn’t quite big enough to dislodge the Interprovincial crown from Leinster.

The team from the Eastern province got off to a rip roaring start when former Connacht player and now Leinster captain Sene Naoupu ghosted through the merest of gaps, following a period of good forward possession, and from the rapid recycle, the legend that is Lindsay Peat was on hand to crash through the cover defense in the corner.

A couple of minutes later it was the aforementioned Peat who set up the second Leinster try. She made a glorious break through a gap in the Connacht defense and thundered into the 22. Quick recycling saw the ball moved swiftly through 3 pairs of hands to Leinster wing Elise O’Byrne-White who outstripped the cover defense to score in the opposite corner.

The youthful Connacht team showed plenty of endeavour as they tried to move the ball through the hands off slow, scrappy ball as Leinster made life difficult at every breakdown.

From another one of those scrappy balls Connacht tried to force the ball wide only to see it intercepted by Jeamie Deacon. The wing forward barrelled into the Connacht 22 and more quick recycling followed by slick hands saw the defending champions notch their third try in the corner, this time fullback Grace Miller, sister of Connacht winger Ali, was the try scorer.

At this point in the match things were looking very ominous for Connacht as they were trying to play too much rugby in their own half off scrappy ball due to the fact that Leinster were winning most of the collisions on both sides of the ball up to this point.

However Brian McClearn’s young team kept working their socks off and played themselves into the game with the forward finally beginning to exert pressure in both scrums and lineouts and prevented any further scores before the half time whistle blew.

The rain that had threatened to arrive through the first half did so with a vengeance in the second. And the change in the weather, along with a change at outhalf for Connacht saw a change in fortune for the girls in green.

Connacht were getting into better field position and forcing mistakes from Leinster.

Six minutes into the new half Connacht manufactured a tremendous score. A solid scrum saw the ball moved swiftly to Fowley, who fed the on-rushing Aoibheann Reilly. The young fullback danced through a tiny gap and sped up to the 22 where she put Miller away. The former Ireland winger was scragged 2 metres from the line. The Connacht pack arrived in droves and after recycling the ball expertly 7 times, Irish wing forward Edel McMahon, playing her last game for Connacht before heading to England to play professional rugby for Wasps, crashed over under the posts. Fowley converted.

The score really boosted Connacht’s confidence and they kept coming at Leinster in waves. Fowley was bringing Connacht wunderkind Beibhinn Parsons into the game more with some assiduous kicking, however it was a break from the ever-green Miller on the opposite wing that brought Connacht back into a scoring position.

A superb lineout maul was held up just short of the line, but Connacht showed great patience and skill in recycling the ball 5 times before Fowley demanded the ball for the backs. The out half then drew the defense before floating a beautiful pass to the waiting Parsons who dotted down in the corner. Game on.

The game ebbed and flowed for the next few minutes but turned in the favour of the defending champions when Connacht uncharacteristically lost a lineout on the Leinster 22, the ball was recycled a couple of times, before reaching Sene Naoupu. The Leinster captain threw a beautiful dummy and accelerated through the gap it created. She fed the supporting Megan Williams. From the return pass from Williams, Naoupu drew the final defender and fed the onrushing Loughrea native Hannah O’Connor, who raced in for the go ahead score.

Fresh legs from the Leinster bench ensured that they were able to survive the Connacht onslaught before the killer score came on the 75th minute when the powerful Judy Bobbett, who had a monstrous game for Leinster, finished off a rolling lineout maul by boshing over the line.

Leinster were well worth the win to become the Womens Interprovincial Champions for the 5th time.

Connacht will take a lot of heart from how they progressed this season and should come back a better outfit next year.