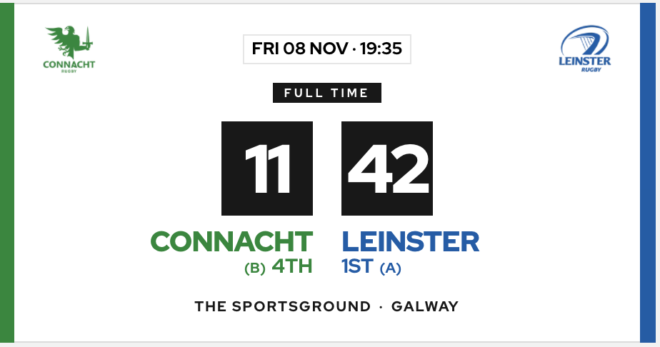 BY the time Jack Carty decided to place a restart deep into the Leinster 22 rather than go short to contest, the game was done, the margin was 35-6 and Connacht were heading towards unwanted records.

Five tries had been leaked at that stage, a storm had enveloped the men in green and their inability to scramble and think on their feet under pressure had been brutally exposed. Leinster’s power and precision rose to the fore off the back of complete and total dominance in the tight five, from their electric front row forwards, to their world class second row, they were in total control and, perhaps, as a result their young back row edged out Connacht’s stellar line up from the get go and never relented.

The backline were good too, but that’s hardly surprising considering they found themselves going forward off every set piece. Phrases like ‘wake up call’ and ‘reality check would have been uttered around the Sportsground as the Friday night non-contest played out and while that’s understandable, this really shouldn’t be viewed as an alarming result for the short term, it should instead be looked upon as a line in the sand moment for the long term direction Connacht take.

This was an evening where the gulf in class between the two sides was at its widest in decades. It’s at this stage because of the young talent that Leinster are bringing through in conjunction with some big signings that anchor everything in place.

Joe Tomane might not be an elite international but at PRO14 level he is an invaluable foil for the young emerging stars such as Hugo Keenan, Jimmy O’Brien and Conor Frawley.

In the pack, a player like Scott Fardy is leading and inspiring in the way Rocky Elsom did ten years ago and his play here alongside the ever dedicated and determined Devin Toner made it easy for the young back row of Josh Murphy, Will Connors and Max Deegan to outshine, overrun and out muscle Jared Butler, Eoghan Masterson and Paul Boyle from almost the first minute. In fairness to that trio of Connacht players, there was no area of the field where Connacht didn’t come up second best.

Jack Carty put Connacht in front on three minutes but by the time he had thrown back the kicking tee, Finlay Bealham had been assessed and withdrawn with an ankle injury, a monumental blow in any game, let alone one against what is arguably Europe’s strongest front row.

What followed left the usually boisterous Sportsground faithful in stunned silence, Leinster clicked into gear and barely let up. Andrew Porter was first over the line, the tighthead had three Connacht players hanging off him after a brilliant break involving fellow World Cup squad member Cian Healy and up and coming star Ronan Kelleher, who would prove to be the stand out player of the night.

The next two tries for Leinster were almost identical stemming from a well executed line-outs and a tight unstoppable maul with Kelleher at the back and getting over the line on both. In between those scores, Darragh Leader had kicked three points for Connacht but all semblance of cohesion and composure had now deserted the men from the west.

Carty was off the field for a HIA, Caolin Blade was having a rare off-day and mistakes were flying, restarts were too short and exit plays from their own 22 were lacking. It all added up to an awful half hour of rugby for Connacht, two more tries followed with Porter barrelling over for the bonus point score and Ross Byrne charging home barely untouched for the fifth.

It was then, and only then that Connacht made the call to go deep with a restart and pin Leinster back, it worked although minutes later, Fardy was piling on the embarrassment by easing through a Connacht maul, ripping the ball from home hands and emerging with possession as if it was a training session.

Half time mercifully came soon after and the second half can be summed up as a little less intense from Leinster and a lot more cohesive and coherent from Connacht. That meant the concession of scores eased and also saw Stephen Fitzgerald notch a score for Connacht, but Leinster had the final say with James Lowe’s intercept breaking the 40-point marker.

There’s no question that Bundee Aki and Colby Faina’a starting as opposed to coming on as replacements with two of the injured second rows, Quinn Roux, Gavin Thornbury or Ultan Dillane being available, would change a hell of a lot here. Throw in Kieran Marmion with Blade impacting from the bench and Connacht are undoubtedly a stronger force and that’s why a result like this might not spell doom and gloom for the rest of the campaign.

There’s also no question that Connacht have made huge progress this season and last, when it comes to establishing a foothold ahead of a lot of the sides in the league and very much on the fringe of the elite contenders for titles. That’s a long way from where they were at the end of Kieran Keane’s short stint in the role of head coach.

Friday underlined the gap between the very best the league and possibly the continent has to offer and where Connacht sit right now. How this jarring reality hits home in the offices at the Sportsground and in the war rooms where long term decisions are made around investment in current and perhaps far more importantly, future stars of the academy are made, could well dictate whether the gap is closed during the next five years or simply continues to grow bigger.

In the meantime, there is this season and this squad. There is no reason to panic. Connacht will have huge scope for improvement in their own intensity levels, accuracy and overall work rate for Sunday’s Champions Cup opener against Montpellier.

The fear factor will have been ramped up as some will suggest that this competition might be a level too high, such ‘backs to the wall’ moments can often be the catalyst of something good for these players. Whether that’s as good as it gets from now on will come down to ambition. Leinster have it, Connacht have excuses.