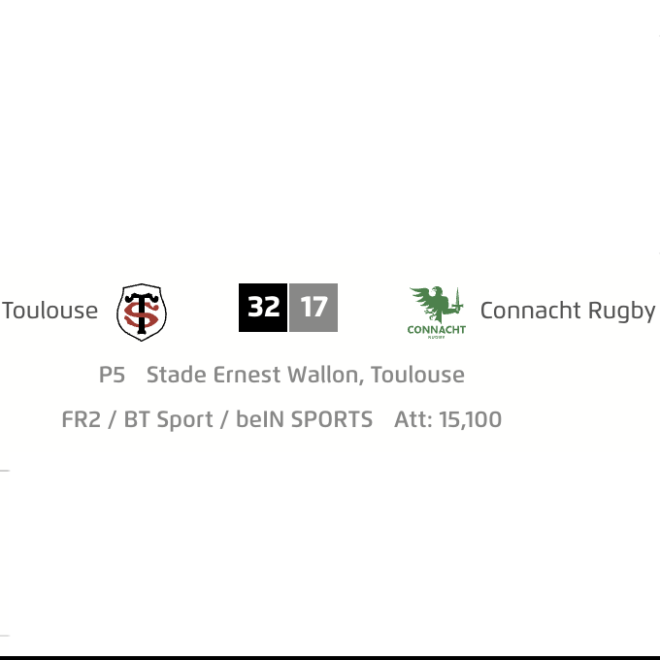 Seems harsh to say that but Connacht came away from a rainy afternoon in the Stade Ernest Wallon with a fairly resounding loss that didn’t come close to reflecting the story of the game on Saturday.

A losing bonus point would have been hugely significant but decision making, poise under pressure and raw power remain a major issue in big games like this for the men from the west, and all of those factors came to the fore in the closing stages here.

There’s no doubt that there are a lot of positives to take away from a performance where Connacht led by a point after 50 minutes at the home of the current French champions and against a team packed full of former and current internationals – especially, when you consider the list of absentees from the visiting squad included Bundee Aki, Denis Buckley and Kieran Marmion among others.

So, this was a fine effort and certainly isn’t a setback in the overall sense. Yet even though Andy Friend’s key line for the post-game media was that the performance and the last two weeks have served to underline why Connacht belong at the elite level of European rugby, you have got to believe that he and his management team were. also privately seething at some of the mistakes in the closing quarter of the contest.

Mistakes, that saw the Westerners concede 14 points – including a bonus point fourth try – and left them without a point to show for their endeavour.
The stakes are high right now for Connacht, staying in the hunt for a play-off place in the PRO14 and reaching the quarter-finals of the Champions Cup requires big wins against elite sides over the next eight weeks.
They will need to beat Gloucester, Munster and Toulouse at home and win away to one of Montpellier and Gloucester.

That’s just to stay on track. Big teams, with big budgets and powerful international class players. There would be no great shame in losing to each of them.
So pats on the back and heroic displays like we saw on Saturday in the South of France are great and that combined with continued consistency in fixtures against weaker sides (such as the Southern Kings that visit for a PRO14 fixture on Saturday) will keep most punters and sponsors happy, but if the ambition within the camp is to go above an beyond, then more is needed.

The reality is harsh. They could play like they did this weekend in every game over December and January, turn heads and lift spirits and still lose seven in-a-row such is the level of opponent they will face.
There’s no mercy here. So for that reason we’ll dwell on the negatives in this tale of a trip to the heartland of French rugby more than one might expect after a performance like this.

The team selection included plenty of risky calls, most notably at loosehead and full back. Matt Healy was in the 15 shirt with three players out in that position and he delivered a solid effort. Peter McCabe was plucked out of professional rugby retirement to play at prop and he faired a little less well.

The scrum was a key problem, Toulouse had former All Black Charlie Faumuinga and a host of other talents in place and garnered the edge all day in that area. In fact, their replacements upped the level of play there and that helped them win the game in those closing stages.

Connacht somehow withstood early attacks from Toulouse with some last ditch tackling and then struck with a brilliant Tom Farrell try that put them ahead early and ensured a real contest. Thomas Ramos replied with a try for Toulouse before his penalty put them in front but on 24 minutes, a swashbuckling Connacht had carved the hosts open again, this time it was young out-half Conor Fitzgerald setting Colby Fainga’a away before Caolin Blade finished off the score.

By half time, Toulouse were ahead, Fainga’a had been sin binned for an over exuberant tackle on Romain Ntamack. You could argue that it wasn’t a yellow but players can’t come that close to the edge of what is safe in such moments. It was a key moment and Yoann Huget’s try underlined why as the hosts
went 15-14 ahead at half time.

That Connacht didn’t concede any more during the period was a success in and of itself.
After half time, the brilliant and unflappable Fitzgerald settled into the contest even more with a cleverly taken drop goal to put Connacht back in front 17-15 only for Toulouse to hit right back with a penalty from Ramos (only after referee Karl Dickson missed a knock in the lead up to the infringement).

That wasn’t the turning point as five minutes later, Connacht were in the home 22 with a lineout that mis-fired and two minutes after that, were back in the same position, executed the lineout only for the maul to malfunction.
Toulouse certainly got away with an infringement at that set piece but home town calls are all part of the challenge in games like this.

The Stade Ernest Wallon has an atmosphere like no other, the crowd are engaged with every play, mobile phones stay in the pockets, every sub gets a standing ovation, even the warm ups get such a reaction. We like to think we create a good atmosphere at provincial grounds in Ireland, but it isn’t a patch on what they can muster up at the home of the 20 time French champions.

By game’s end, Toulouse had cut loose, using a dominant scrum, a Jermoe Kaino led back row and a disruptive lineout to garner turnovers and penalties.

They notched up two tries from Huget and late on from Pita Ahki to secure the win. They
also forced turnovers at the breakdown and ripped possession from Connacht hands in the contact area as they upped the intensity.

Healy had a chance off a cross field kick from Jack Carty in those closing stages that could have pulled Connacht within bonus point range, but the wet conditions and the bounce of the ball evaded him.

It was a harsh lesson but all part of a steep learning curve for some of the younger players
in the group. Fitzgerald, Farrell, Tom Daly, John Porch and Matthew Burke all emerged from a first taste of an away day in Champions Cup rugby with plenty of positives and there is lots to build on for the rest of the group.

In the context of the competition, this was far from a critical blow, the back to back fixtures with Gloucester in a
couple of weeks will be more decisive there, but it certainly was an afternoon where tough questions were asked and answers weren’t found.